The LaVida Coin is the latest ICO launched by Datuk Seri Hasmiza Othman or better known as Dato’ Vida, beauty mogul and a divisive figure in Malaysia.

Perhaps because of Dato’ Vida’s reputation as a successful businesswoman, the LaVida Coin has attracted attention from those who may not otherwise consider investing in cryptocurrency. I’m concerned that certain Malaysians, seeing the success of sudden bitcoin millionaires circa 2017, look to the LaVida Coin as an opportunity to join a cryptocurrency early in anticipation for a future explosion in value.

The mogul plans to raise a staggering $1.5 billion from the endeavour. According to the website, the funds raised will be broken down as per below:

Many crypto-experts would agree that this isn’t quite a healthy mindset to have at this point in cryptocurrency history.

I don’t mean to cast any aspersions on Dato’ Vida or her intentions, but when we looked into the coin, we noticed some fishy things about the whole endeavor that would raise the hackles of any seasoned cryptocurrency enthusiast.

1. No Recourse for If the Project Is Underfunded

How many of the 3 projects end up getting completed will depend on how much the team raises by the end of the ICO, according to the white paper. The white paper also mentions that it has no concrete measures in place in case the project is underfunded.

After a cursory glance of the social media discussions, it seems like public considers the LaVida Coin as a coin, even though it is actually a token—and these are two different beasts.

To put things very simply, think of a coin as currency. Coins have characteristics similar to a traditional currency and can be used to buy and sell goods and services as long as merchants accept it as tender.

Meanwhile, think of buying into a token like buying into stocks: you’re investing money into the company and project in hopes that it will become successful. The tokens bought could either be a Utility Token (where you trade the coin for products and services within a specific platform) or a Securities Token (most typically, a token that represents shares in a company).

For more information about coins versus tokens, this Medium post outlines things in a simple and concise way.

Page 8 of the white paper calls the LaVida Coin a utility token, and intended to eventually be used in all three projects as a means for buying and selling. Despite this, there are very little details on token economics and how both these functions will be merged.

3. No Mention of a Legal Entity

As a general protip, any aspiring crypto-investor looking into ICOs should steer clear of white papers that do not mention the legal entity (for Malaysian companies, look for the Sdn. Bhd.s or Ltd.s).

4. No Mention of the Network This Crypto Will Be On

When it comes to tokens, issuers will usually either put it on the Ethereum network, in which they’ll be subject to Ether protocols, or develop their own network.

If it will be on the Ethereum network, the white paper will mention this, and if it’s on its own network, the issuer should go into detail about what this network’s protocols are.

Neither of these details are available in LaVida Coin ‘s white paper.

Besides Dato’ Vida herself, there’s absolutely no mention of the team behind the ICO, neither the organisations or individuals that will be developing any of the 3 projects listed.

Many ICOs will list the team members for discerning investors to look into the team to determine whether they have the chops to work on the task assigned to them. 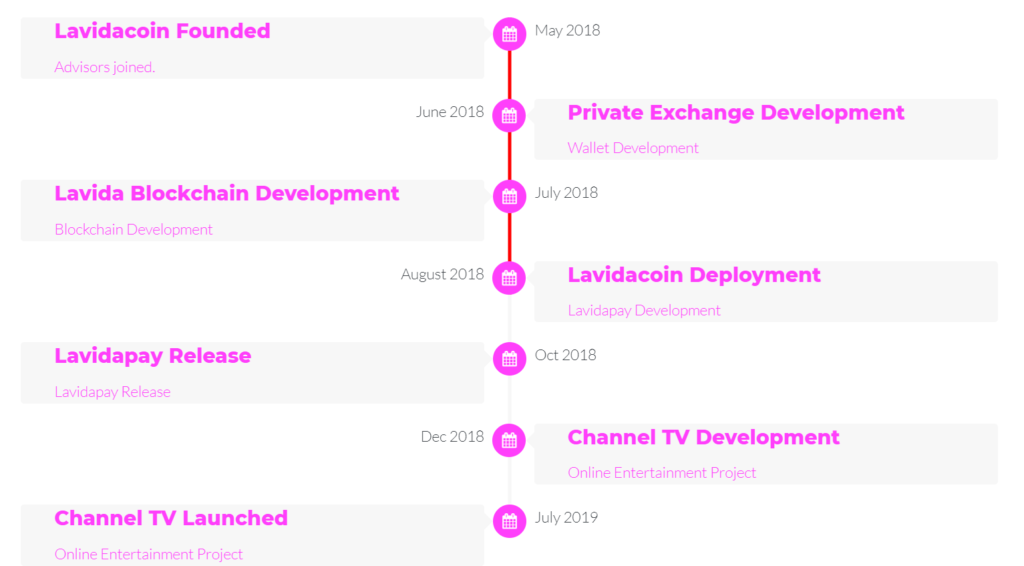 The roadmap is on the website, but not in the white paper.

Of the projects outlined, besides an estimated completion date there are very little details provided to justify the huge sums requested.

Of the three key projects outlined:

“At this time, the entertainment platform is in the inception stage, and there is no overall strategy in place regarding the types of programming it will broadcast, and the exact viewer demographics it will target. These tasks will be completed during the initial development stage once development funding has been secured.”

LaVida Coin has aspirations towards building a community complex of the likes that hasn’t been seen in Malaysia before, where the LaVida Coin can be used within it as accepted currency, and probably the lowest-priority project of the three listed.

Besides the fact that there will be a mosque at the centre of it all, it will be auctioned of upon completion and that it is a “one-stop shop, a place to meet and gather within a Muslim community”, there is very little information about what is supposedly a massive $400 million endeavour.

There are some voices in the industry that have expressed concern that the team is using religion as a marketing gimmick to target the Muslim-majority population in Malaysia.

However, it is worth noting that this type of project is not off-brand for Dato’ Vida, who has dabbled in mosque-based projects before.

According to the white paper, the payment gateway is intended to compete with the likes of Paypal, Skrill, Alipay, and Neteller, in which the LaVida Coin can be used with “authorized independent merchants and vendors who accept LaVida Coin “, or the issuer itself.

Generally, payment gateways for fiat and cryptocurrency are separated, because while they are intended for the same purposes, have very different underlying technologies behind them.

If the LaVida Coin is intended as a utility token, there is no mention of whether it will be used as its own currency in-platform, in exchange for Dato’ Vida’s products, discounts, or any other functions.

While many ICOs will project for the success of their ICO, quotes on Utusan Malaysia seemingly record Dato’ Vida guaranteeing it. This is often a cause for alarm.

Loosely translated from Malay, Dato’ Vida was reported as saying buy now, because the token is cheap and you can sell it back by Christmas since the price of this cryptocurrency (described as mata wang) is expected to soar at that time.

As we have said before, anyone guaranteeing returns for any investments is a huge cryptocurrency no-no, because the scene is volatile and nascent for such statements.

You don’t even have to take this from just us. A screenshot depicting David Low, Luno Malaysia’s country manager, has been circulating the internet with the following to say:

The project lacks too much crucial information.

It’s possible that deficiencies come from a lack of experience in producing a white paper, but what becomes clear from our dive is that even if this project is produced with the best of intentions, it is too unfocused and too vague to be a good investment.

With a timeline and deliverables that will shift and change based on how much money they end up raising, we feel like the whole three-layer project lacks conviction from the team, as they seem unsure of whether they can achieve their goals. Separately, all three projects linked seem to be in very early stages not fit for fundraising yet.

This vagueness can’t be good for the final value of the LaVida Coin.

We wouldn’t be kicking up a fuss if this is just another crowdfunding project, but by branding this project as a cryptocurrency and seemingly promising returns for investors, we’re worried that this project would tarnish Malaysian ICOs and devalue other projects if it does end up falling through.

Perhaps sharing in our concerns, the Securities Commission has announced that they’re reviewing the LaVida Coin  for possible securities-law breach.