HSBC announced that it has successfully executed a live blockchain Letter-of-Credit (LC) transaction in Malaysia.

The transaction involved the import of resin by Malaysia’s Simply Packaging Sdn Bhd (Simply Packaging) from a Singaporean company, both active players in the packaging and chemicals industry respectively. HSBC Malaysia was the issuing bank and HSBC Singapore was the advising/nominated bank.

Globally, this is the eleventh blockchain transaction led by HSBC (NYSE: HSBC), and the first pilot blockchain transaction for HSBC Malaysia. Prior to this, a shipment of soybeans was transported from Argentina to Malaysia and the deal was financed using a Letter of Credit, which was completed digitally on R3’s Corda blockchain platform.

This marks a significant step for Malaysian companies in the digitisation of trade. It makes doing business simpler and faster by reducing transaction times and brings in working capital efficiency. The use of trade finance solutions like blockchain also helps to increase the velocity of trade, especially in situations like these where shipping routes are short, like the cross-border trade between Malaysia and Singapore. 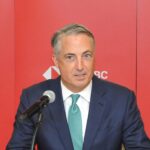 Cross-border trade between Malaysia and Singapore was worth over US$85 billion in 2018. Whilst the physical transfer of goods between neighbouring countries takes a relatively short time – usually under 48 hours – the administrative paperwork often delays their delivery. The process of exchange and checking of documents typically takes 5-10 days. The Simply Packaging blockchain exchange was completed in 24 hours.

By integrating blockchain technology, the transaction has entirely digitised the administrative process through the e-presentation of key trade documents by enabling:

Luno Rakes up Over Half a Million Malaysian Users in 2021