It goes without saying that 2020 was a tumultuous year on the back of the pandemic that has unfortunately affected the livelihood of millions, which also served as fuel for the rapid growth of Malaysia’s fintech space. In our latest fintech Malaysia report 2021, we deep dive into the adoption across various fintech verticals, look at some key movements and regulatory updates within the local fintech space.

We would also like to take this opportunity to thank BigPay for partnering with us to produce this report and our generous sponsors; GHL, pitchIN, CapBay, Payfo and Jirnexu for helping us make this possible.

Malaysia’s digital shift has been ongoing for the past decade but the pandemic has accelerated digital banking adoption, the report says. In 2020, online and mobile banking penetration reached 112.5% and 61.8% respectively, and RM 460 million worth of mobile banking transactions were conducted – a 125% jump compared to the previous year. 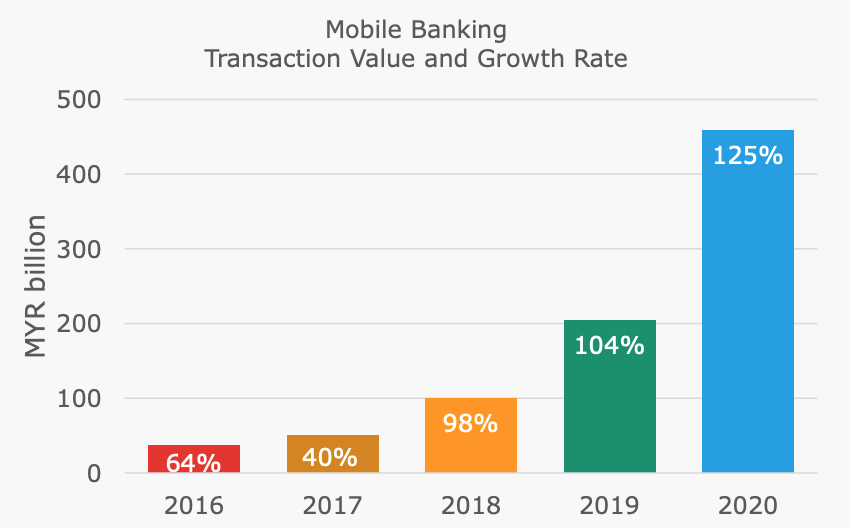 The Malaysian government’s Movement Control Order (MCO) acted as a catalyst, helping to add 3 million new mobile banking service subscribers last year as well as pushed e-wallet usage and adoption to new highs. Merchants were quick to embrace the trend, with over 400,000 new businesses registering for QR code payment acceptance, a 164% jump from the previous year.

Digital finance adoption on the rise

Booming adoption of digital finance was also observed across other fintech segments, including e-remittances, wealthtech, alternative financing and cryptocurrency trading.

In e-remittance, total transaction value grew by 106% last year. With RM 26.5 billion worth of remittances being sent out, e-remittance saw its market share grow from 14% to 25%, signaling that Malaysians are rapidly ditching traditional providers for new age, lower cost e-remittance providers.

In December, the central bank released a licensing framework for digital banks. Up to five digital banking licenses will be granted by Q1’22, it said. 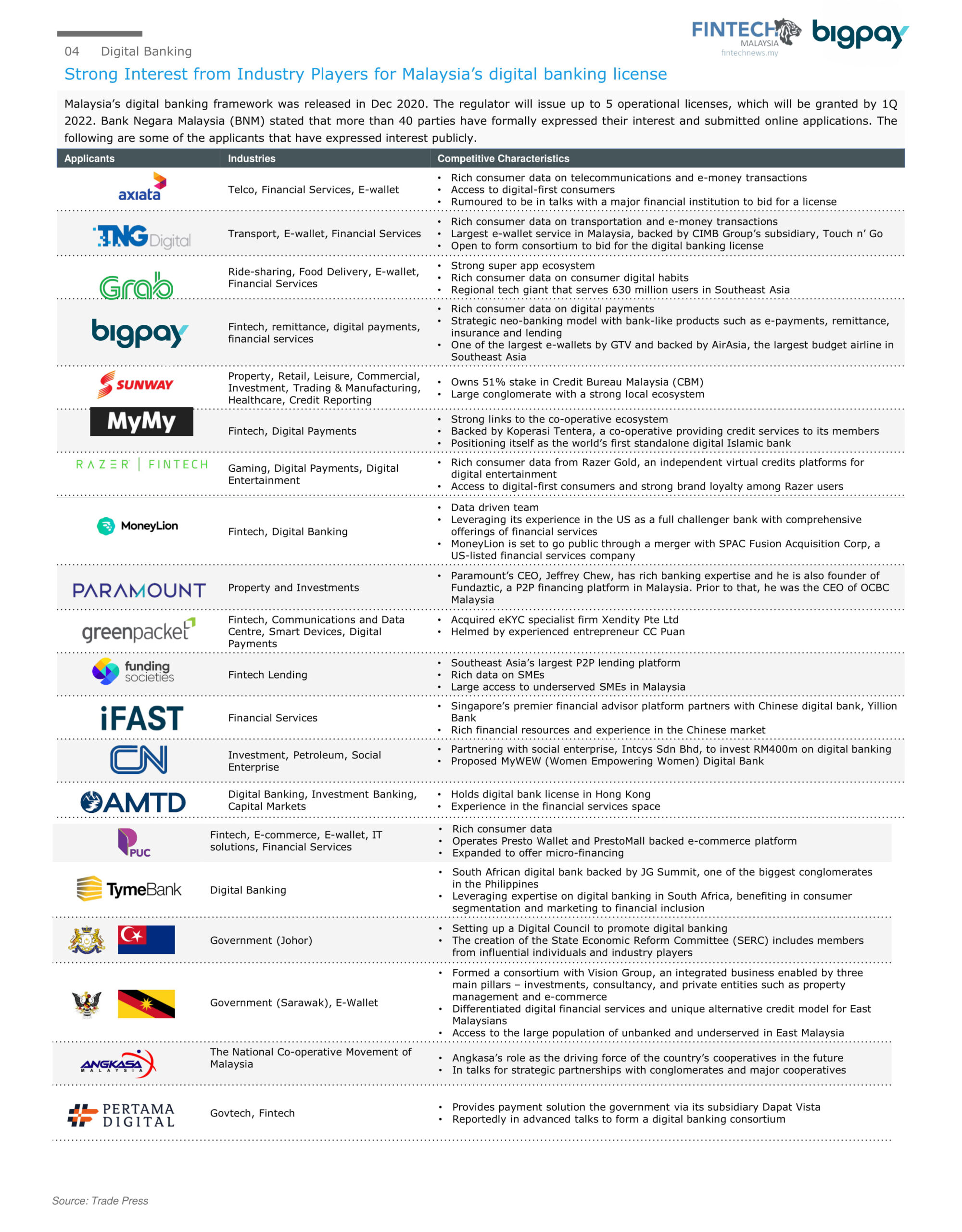 So far, more than 40 parties have formally expressed their interest and submitted online applications. They include usual suspects like Axiata Digital who is the operator of Boost e-wallet, BigPay, TNG Digital, and other foreign players like AMTD, Tyme Bank, and Razer Fintech.

AMTD already operates virtual bank Airstar in Hong Kong, which it established with Chinese smartphone maker Xiaomi as a joint venture. In Singapore, Grab is part of a consortium that was recently granted a digital banking license. And Razer Fintech, the fintech arm of the gaming firm, has voiced ambitions to go after the Filipino and Malaysian digital banking markets after failing to make the cut in Singapore.

Below is our comprehensive map of the Malaysian fintech ecosystem, where like all previous years, the payments and e-wallets categories remain dominant.

In 2020, one particular sub-segment that has seen participation from new players is the Buy Now, Pay Later (BNPL) space, which saw players like Grab, Shopee and GHL each introducing their own BNPL play and foreign startups like hoolah and Atome entering the fray. Local players like Split have also seen decent progress having processed RM 10 million in transactions. 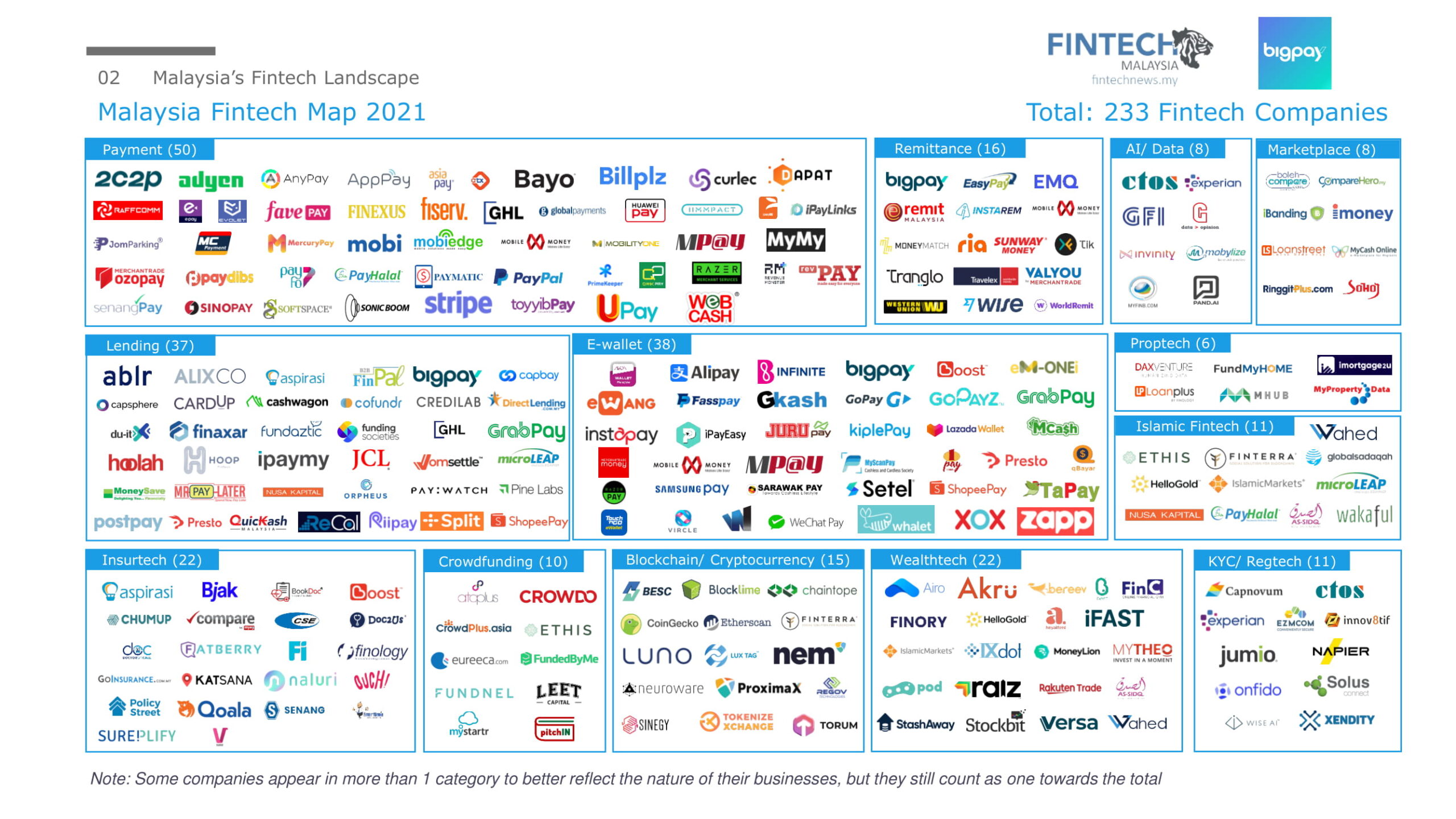 While we are confident that the map presented is the most accurate representation of the Malaysian fintech ecosystem, we do recognise that not every company is captured on this map and this compilation is based on our best efforts.