Users Can Finally Pay Tolls with the TNG E-Wallet, but It’s Not Available to Everyone Yet

In Malaysia’s crowded e-wallet space, it is becoming increasingly difficult to carve a niche with each player pursuing similar strategies of giving cash backs and merchant discounts.

Among Malaysia’s over 30 players, Touch ‘n Go has an upper hand that it has yet to tap into, until recently; when Touch ‘n Go unveiled its pilot program to enable selected users to pay using their TNG e-wallet when paired with its RFID system.

Syahrunizam Samsudin, CEO, Touch ‘n Go explained during the company’s press conference that this new feature is part of Touch ‘n Go’s data play. By pairing the RFID with the user’s e-wallet, it allows the company to identify user patterns and provide them a richer set of data.

This data can then be shared with local authorities for the purposes of traffic planning and management. He further explained to Fintech News Malaysia that Touch ‘n Go has no plans to monetise this data.

The RFID system is basically a sticker which will be fitted onto a pilot tester’s car windshield or headlamp. Once installed the overhead scanner reads the radio frequency from the sticker and the toll charges will be deducted from the user’s TNG e-wallet. The installation can be done at any of their 5 fitment centres.

Unlike the the previous update where transactions will only be reflected within 42 hours, the RFID version enables users to track their transaction real-time. They have also included a nifty security feature, when a tag is removed from it automatically becomes void.

Much like the Smart Tag system, if you do not have enough funds in your wallet, the toll barrier will not open, which could lead to a congestion if the company does not tweak this system when it is fully rolled out.

The top up method remains the same where users can opt to pay via FPX (bank transfers), credit/debit card, or using a top-up pin which are sold in outlets like 7- Eleven.

Criticism of the System

While this new update is definitely a step forward in the right direction, it has unsurprisingly drawn some criticism from netizens. Though it does not fall fully under the jurisdiction of Touch n’ Go some users lamented that the company should just replicate Singapore’s ERP system

Several of their pilot testers have also raised issues about the sensitivity of the the sensor, commenting that it does not accurately detect the RFID signal. 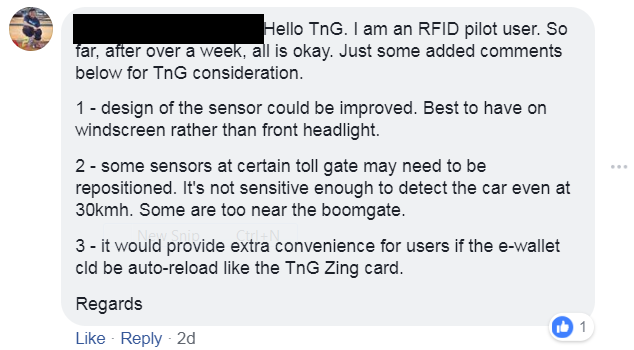 When similar questions were raised during the press conference, Syahrunizam commented since they are providing the RFID as a service rather than selling the devices they are not beholden to it and as they progress on this journey improvements will be made along the way.

Grab and Maybank Ties Up to Drive GrabPay