MyEG recently unveiled their PayMe, a blockchain-based payroll management software. Most of us know MyEG for enabling citizens to pay the Malaysian government online for services like road-tax renewal, zakat and many more.

While some blockchain enthusiasts will celebrate the fact that there more blockchain use cases in Malaysia beyond ICOs. There are also some in the community wonder if MyEG new system is rooted in genuine use cases or is this a gimmick for the company to remain relevant.

What Does MyEG’s PayMe Aim To Solve?

According to MyEG, PayMe is intended to help large companies with many employees to better manage their complex compensation structures and to minimise dispute.

They also stated that the blockchain architecture is ideally suited to address inefficiencies in payroll management due to its immutable nature which translates to transparency for both the employee and employer.

Do You Need Blockchain to Solve it?

There are many resources out there that serves as a useful guide to review the practicality of a deploying blockchain into your project. One that resonates best with me is Suichie’s model. In this article I think it would be useful to look at it through the lense of this chart. 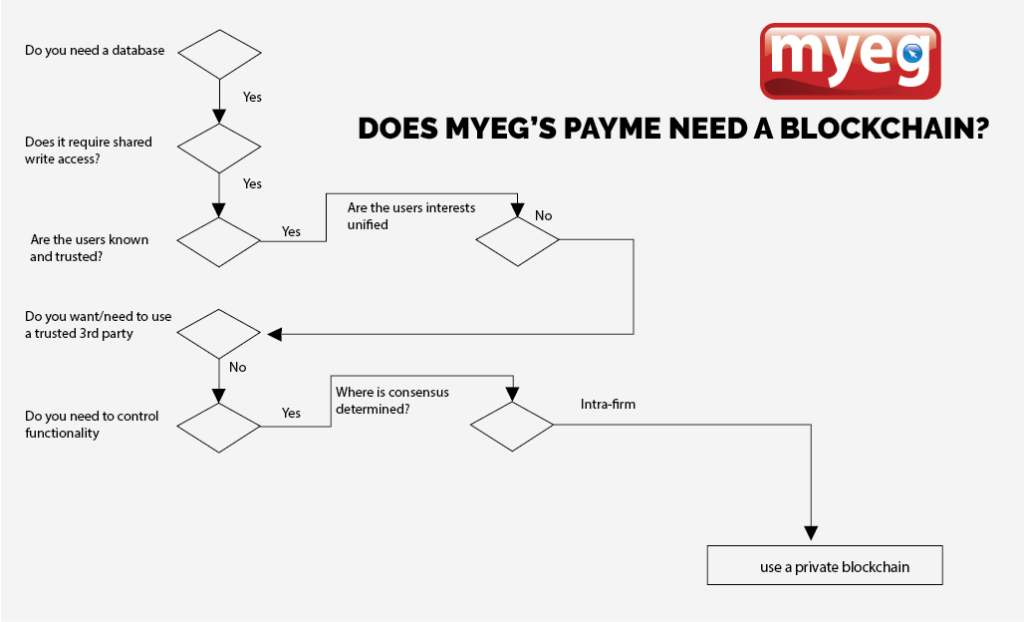 I’ll admit my first impression is that MyEG’s initiative was a bid to remain relevant but after some inspection it certainly ticks all the boxes if you were to refer to Suichie’s model.

This solution is obviously an overkill for small to medium firms, since a traditional HR payroll system like MYOB or even Kakitangan would be more than sufficient to do the job.

However if you are a large firm with dynamic compensation structures like commissions, overidding commissions, overtime, claims, freelancers, contract staff and you multiple that by the thousands of employee that you have across countries — that’s when some of the complexity can kick in.

From my personal experience of doing part-time gigs in my younger days in the construction sector, you can see how this could be applied in the industry. Typically migrant workers are paid in cash and workhours are recorded manually by an on-site supervisor.

While the use of blockchain is justified, the jury is still out on whether MyEG’s PayMe will significantly improve transparency and efficiency, since they are still currently in their pilot phase and details like which blockchain it’ll built own still remains unknown.

Taylor’s University to Create Blockchain Syllabus in Partnership with NEM