Sneak Peek into the New RinggitPlus Chatbot and Revamp

RinggitPlus the financial comparison site brand owned by Malaysia’s top funded fintech company Jirnexu, has announced an overhaul of their site and along with it a new site-wide chatbot functionality.

During their press conference, they have stated that these changes are scheduled to go live some time Mid-November.

The new revamp is built to be a mobile first experience — the look and feel of it behaves like that of a native mobile app. In the age of where most consumers experience the internet through the lense of their mobile phones this direction certainly makes sense. This rings true for the RinggitPlus audience as well, on the sidelines of the press conference, Fintech News Malaysia was told that roughly 80% of their visitors interact with their site through mobile phones.

The Upsides of The RinggitPlus Chatbot Experience

The new chatbot seems to be an expansion and improvement of its previous iteration in partnership with RHB.

Instead of just enabling application for RHB financial products, the functionality has been expanded to all the product offerings by RinggitPlus which includes — credit cards, savings, loans and insurance from various FSIs on their platform.

The demo also showed that, to some extent, the chatbot has some built in NLP capabilities to understand Malaysia’s unique brand of English.

Screenshot of the chatbot in action (beta version)

One nifty but simple feature that addresses the frustration that many Malaysians face (myself included) when filling up forms is the need to key-in your date of birth despite having already punched in your NRIC number.

Once users finish answering all the questions posed by the chatbot, a form will be generated for users to verify and confirm the accuracy of the details provided, the details will then be passed on the bank/insurance company for their approval process. 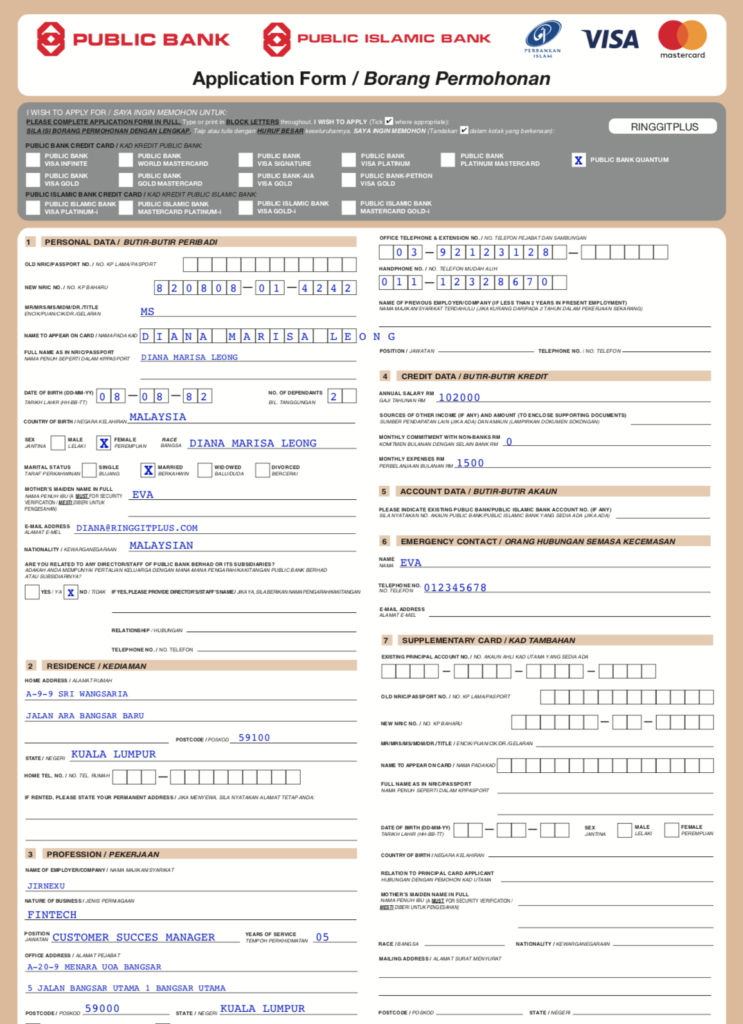 Before everyone jumps at us for violating PDPA rules, we’d just like to say that details shown the screenshots above does not contain real personal info and is intended for illustration purposes only.

Possible Improvements that RinggitPlus Should Consider

The chatbot is still in its beta version, so we imagine some of the kinks will be worked by the time it goes live in Mid-November so we’ll avoid bringing those points up.

However to be fair, there’s really no easy answer to getting all the details required by the bank without going through that series of questions – but hey maybe a spark of inspiration might take place prior to the launch.

Another cool feature that perhaps can be added in the RinggitPlus pipeline would be to consider extending a version this functionality to Whatsapp, something that banks like DBS are already doing in Singapore.