Ten years away from the global financial crisis and in the aftermath of the 1MDB scandal, consumer confidence in Malaysia’s financial sector is strong, with 83% of Malaysians saying the sector has a good reputation.

In the inaugural Financial Services Reputation Index for Malaysia,by MHP Communications, it is also revealed that 83% of consumers believe financial services companies have become more trustworthy in the past decade.

High levels of positivity were also seen across Asia, with 90% of respondents in Singapore and India rating the industry’s reputation as good, as well as 82% and 84% in China and Hong Kong respectively. These findings are in marked contrast to sentiment in the United Kingdom, where only 53% of respondents polled were positive. Almost 9 out of 10 Malaysians (88%) view their banks positively, with an almost equal number believing that local payment system companies have a good reputation (87%). However, trust falls away for industries in venture capital (73%) and private equity (72%).

Malaysians also ranked bankers as the most trustworthy profession in the country (60%), followed by journalists (38%) and the police (36%). They do not share this sentiment for politicians/government officials, who were the least trusted among the professions asked (12%), potentially due to a lack of public confidence in previous administrations and also from the reputational fallout of various Government-linked financial scandals. 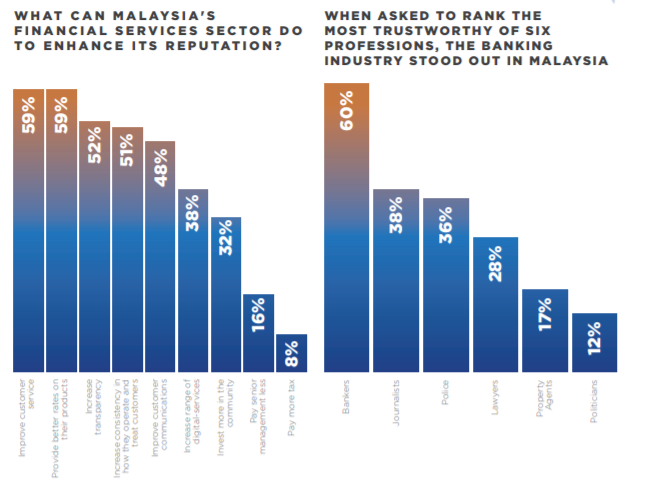 When asked about the digitalisation of financial services, almost half of Malaysian consumers (46%) say that greater use of technology has increased their trust in financial services companies. 88% also believe that new and emerging digitally-based financial services providers are either equally or more trustworthy than traditional firms.

However, Malaysian consumers also identify data security (27%) as their number one concern with financial services. This is followed by honesty (20%); performance of products (17%) and their own financial literacy (15%).

Online peer-to-peer lending has some ways to go towards building trust with consumers. More than half (53%) of consumers in Malaysia consider these platforms to be highly risky. 14% of consumers rated them at the maximum level of “Very High Risk”, the same as investing in stocks and shares.

In Malaysia, 66% of respondents attribute the increase in trustworthiness in the financial services sector to increased regulation aimed at protecting consumers, with 46% stating that increased competition had improved practices.

When asked about what actions the sector can take to enhance its reputation in Malaysia, 59% of respondents said they wanted to see better products and customer service in financial services.

The three most important reputation criteria for respondents when choosing a financial services company in Malaysia are if the organisation operates responsibly (80%), is a good employer (76%) and if it gives back to the community (73%).

What Are Malaysia’s Top 5 Banks Doing About Fintech?