How Technical Debt Impedes Your Bank’s Ability to Innovate

In a technological landscape where speed to market has become a distinct competitive advantage, technical debt can seriously impede an organisation’s ability to innovate.

Technical debt refers to shortcuts taken and gaps left unaddressed, as organisations race to cut down on time to market for their applications. These could take place in terms of IT architecture and infrastructure, or the code itself. They require modifications later on, meaning that organisations have to commit additional resources to patching up imperfect built software.

A report by OutSystems on ‘The Growing Threat of Technical Debt’ notes that business leaders are aware that building software this way may lead to future costs. In fact, the problem is expected to balloon into a US$5 trillion problem in the next decade. However, few are able to perceive its causes, and their true financial and strategic burden, the report says.

The report is based on a global survey of 521 cross-industry IT decision makers across both SMEs and corporations, in partnership with research company Lucid.

The cost of technical debt

Technical debt can tie resources – both financial and hard-to-find IT talent, the report said. These resources are often dedicated to fixing old technology, compounded by a lack of adequate strategies to address and prevent this kind of debt. It also hinders innovation – about seven in ten surveyed companies said that it affected their capacity to innovate.

Further, a limited pool of developer talent largely interferes with an organisation’s ability to address the problem, with turnover in development teams listed as one of the top two factors causing it. Another top reason was a high number of development languages, which complicates system upgrades and maintenance.

All this put together means that the problem of technical debt, while seemingly straightforward, may in fact be much more complicated to address.

“With technical debt, there is no such thing as standing still: Companies are actively addressing it or falling further behind,” the report notes.

What the numbers say

Technical debt affects organisations across all levels, but especially enterprises (companies with more than US$2.5 billion in annual revenue). Addressing the problem claims 28% of budgets at commercial companies (US$1-2.5 billion in revenue) and 27% of SME budgets (US$50 million to under US$1 billion revenues).

For enterprises, this debt is especially burdensome, as it claims a bigger portion of their budget (41%) than running status quo operations (29%), or innovating and building new capabilities (30%). With technical debt already running into hundreds of millions of dollars, CIOs are also seeing this burden rise in recent years.

At the same time, the report suggested that it is possible to pay off technical debt. This would require a development process involving short-term deadlines and long-term strategic goals, and an alignment between app development platforms, organisational structures and team priorities. 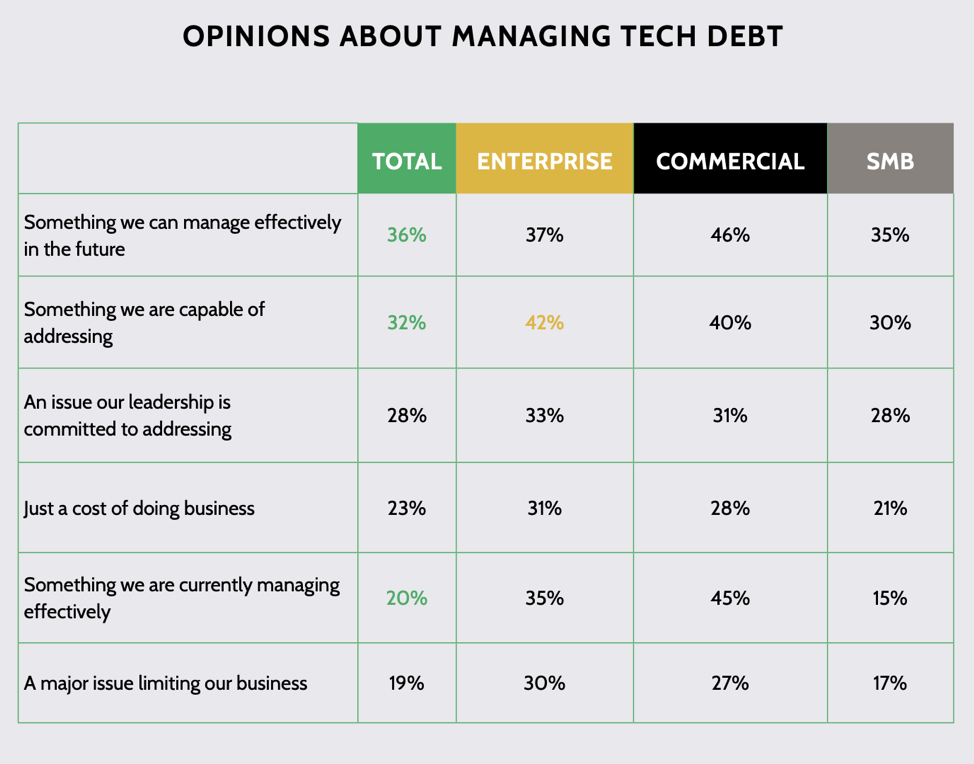 What it would take apart from tools and processes, however, is a mindset shift at the managerial level. The OutSystems report suggests that instead of treating this billion-dollar drain on resources as a cost, businesses need to switch to an “aggressive and comprehensive approach” instead.

By detailing an action plan, roping in the right partners that can help with the problem, and taking strategic action towards addressing it, it is possible for organisations to turn technical debt into a thing of the past.

Download the ‘The Growing Threat of Technical Debt’ report by OutSystems here.

Changing the World With Bank of Things