When it comes to fintech regulation, regulators in Malaysia have taken an activity-based approach that considers the sorts of businesses financial companies conduct.

Depending on the nature of these business activities, startups will know whether they fall under Bank Negara Malaysia’s (BNM) supervision or not, as well as which piece of regulation they must comply with, Suhaimi Bin Ali, director of the Financial Development and Innovation Department at BNM, said during the launch of Fintech Booster in early August

“We regulate [based] on activities,” Suhaimi explained during his session at The Orbit. “So if [the] activities [you conduct] fall into our oversight, whether you are a fintech or not, then you come under our supervision. [For example, if you take] deposits, then yes, [you are under the regulatory oversight of BNM]. But if you just do lending and do not take deposit, then you may not fall under our supervision.”

“Looking at your activities, you will be able to have a conclusive understanding of whether you fall under BNM, other government authorities, or the [Securities Commission (SC) oversight,]” Suhaimi said, noting however that there were some activities that fell under joint-regulations, for example, digital assets and investment banking where players in these fields would come under both BNM and SC supervisions. 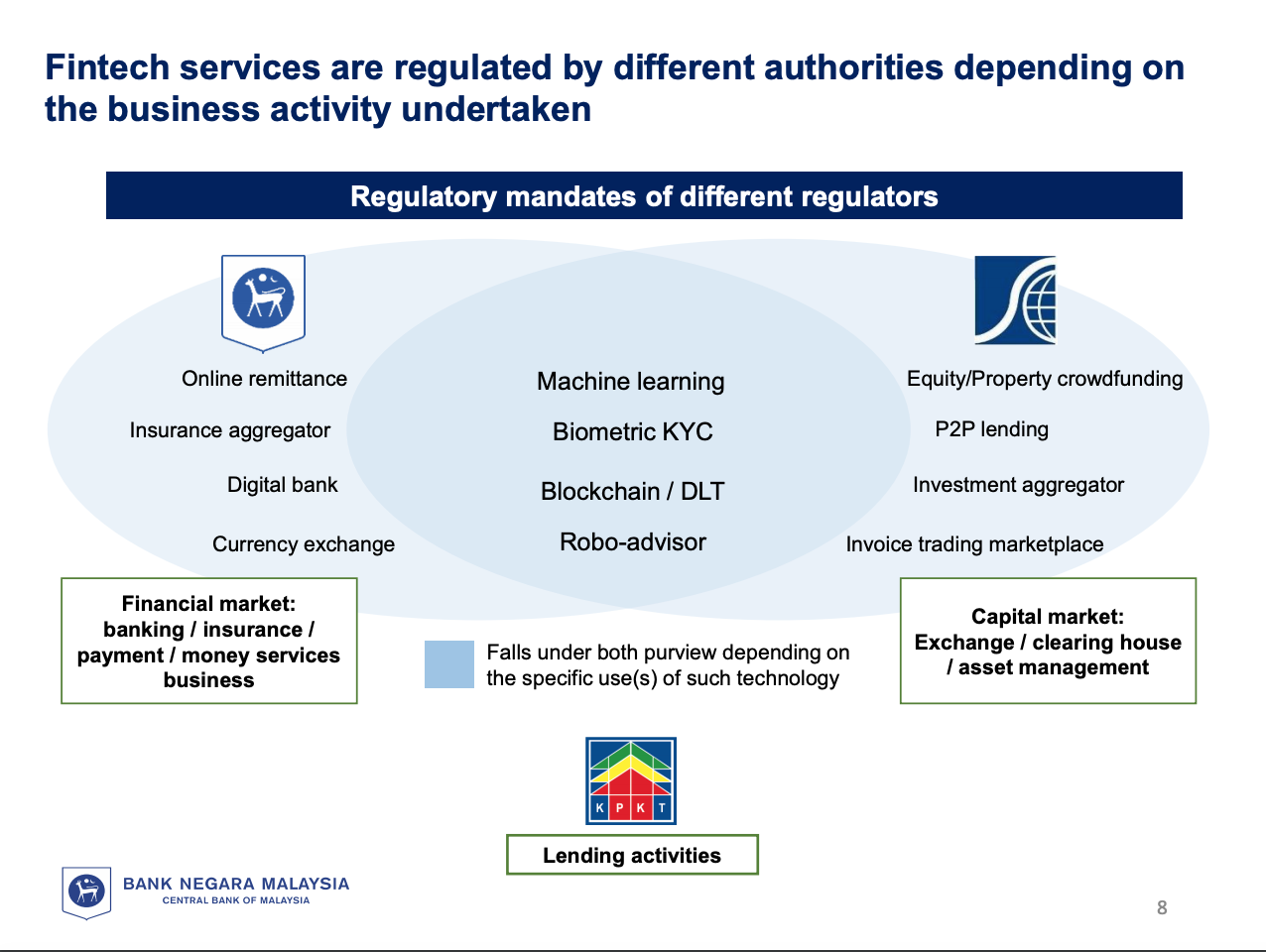 For those who fall under BNM’s supervisory scope, Suhaimi said there were three broad categories: the License Regime, the Approval Regime and the Registration Regime, with each of these categories requiring companies to follow more or less stringent regulations depending on the risks they may pose on financial and monetary stability, as well as customer protection.

“The underlying concept of these regimes is the proportionality of regulations. So those that pose the highest risks to the system tend to be more regulated than those in the Approval and Registration regimes,” he explained. “For example, under the approval regime, a lot of our regulations target customer protection and ensuring the integrity of the system.” During the session, Suhaimi also delved into the key pillars and fundamentals behind BNM’s approach to fintech regulation, citing three principles the central bank has been following: parity, proportionality and neutrality.

On parity, Suhaimi said the end goal was to “provide a level-playing field for people playing in the same place doing the same thing,” all the while considering the special requirements new entrants and innovators might need to develop their ideas.

He cited the example of digital banking, a business activity for which BNM has been developing a framework that will include some flexibilities for new players to experiment.

“When we introduce the framework for digital banks … next year, or hopefully by the end of 2020 … ultimately [the end goal would be for it] to move towards a level-playing field. But given that we recognize the need for experimentation, we are providing what we call the Foundational Phase for three to five years for new players to experiment and to scale up,” Suhaimi said. “But ultimately they will need to be compliant with the same set of regulations that the incumbents have to comply with.”

BNM issued its first exposure draft on the Licensing Framework for Digital Banks in 2020 in which it proposed to adopt a phased approach to the regulation of licensed digital banks.

During the first phase, called the Foundational Phase, licensed digital banks will need to comply with simplified regulatory requirements in the fields of capital adequacy, liquidity stress testing, and public disclosure, among others.

So far, BNM has been approached by more than 25 entities interested in launching digital banks, Suhaimi indicated, adding that the central bank will be issuing up to five digital banking licenses.

On proportionality, Suhaimi said regulations must be “proportionate to the benefits and the risks,” a principle that’s true to all BNM’s new policies but which might still be lacking for some older rules.

“Where we may not exactly have proportionality currently include customer protection, and anti-money laundering/combating the financing of terrorism (AML/CFT) in regards to compliance,” he said. “I know that in other countries they have moved to apply proportionality in those areas. It is something that we are currently looking at.”

Finally, on neutrality, BNM is prioritizing the desirable outcomes and potential of emerging technologies, rather than technology itself, Suhaimi said.

“We don’t care if you are using blockchain, centralized systems … we will not intervene in this space,” he said. “For example, we are experimenting with blockchain technology for trade finance and that is done collectively with 11 banks. They [are the ones who] decide on the technology.”

“We provide the enabling ecosystem to allow them to come together and experiment within our innovation outlet, within BNM. But they decide as an industry. For us, what we want to achieve is the outcome.” 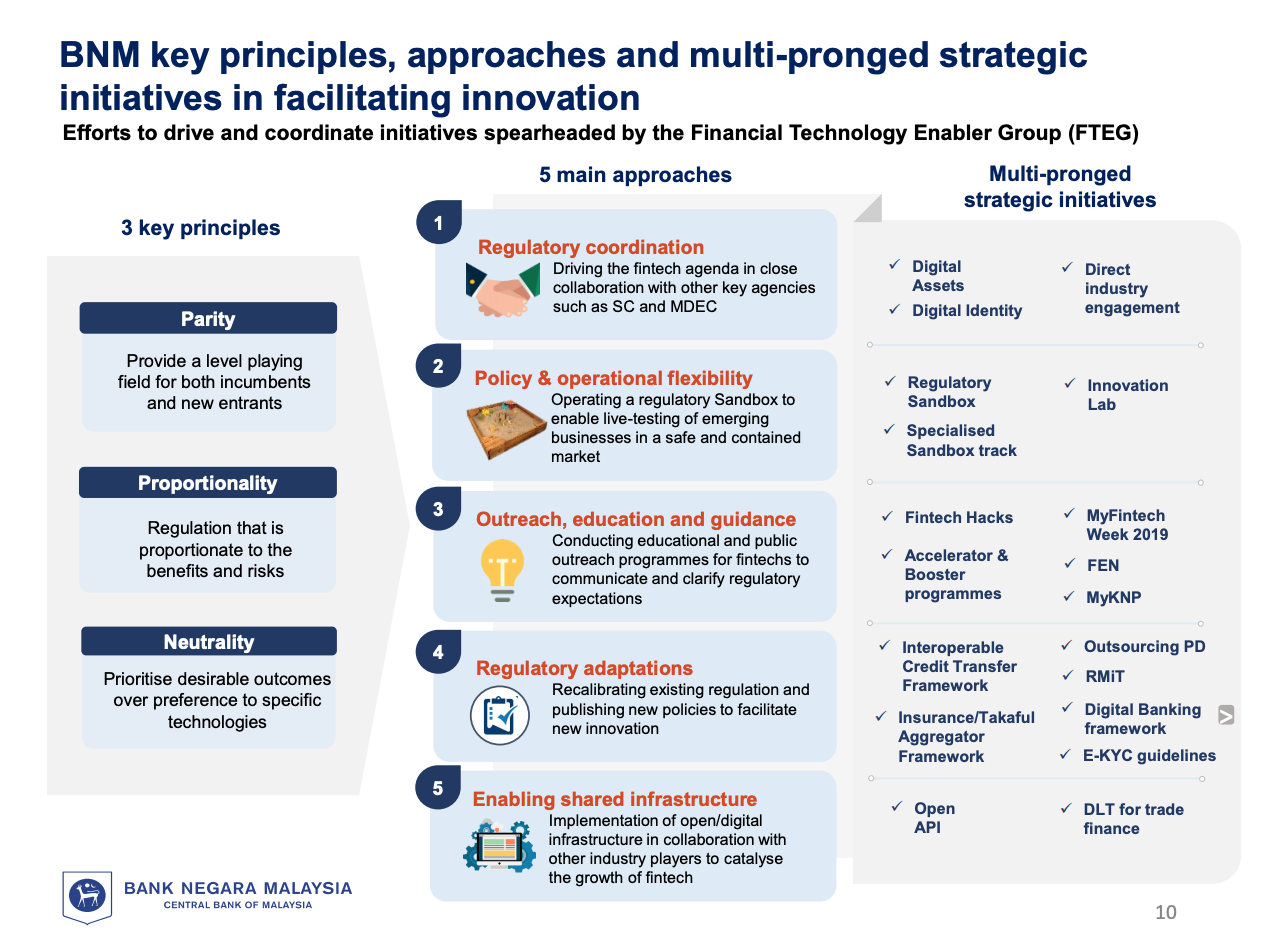 Suhaimi also addressed the numerous misconceptions that startups might have about BNM, fintech regulations and the central bank’s regulatory sandbox regime. For one, being accepted into the sandbox doesn’t guarantee them a license.

“The sandbox is for you to experiment and to test your solution,” he explained. “If we have enough information about your company, we will try to share that information with the department in charge of the licensing so it actually becomes faster for you, and you don’t have to repeat the whole process. But there is no guarantee that you will get a license.” 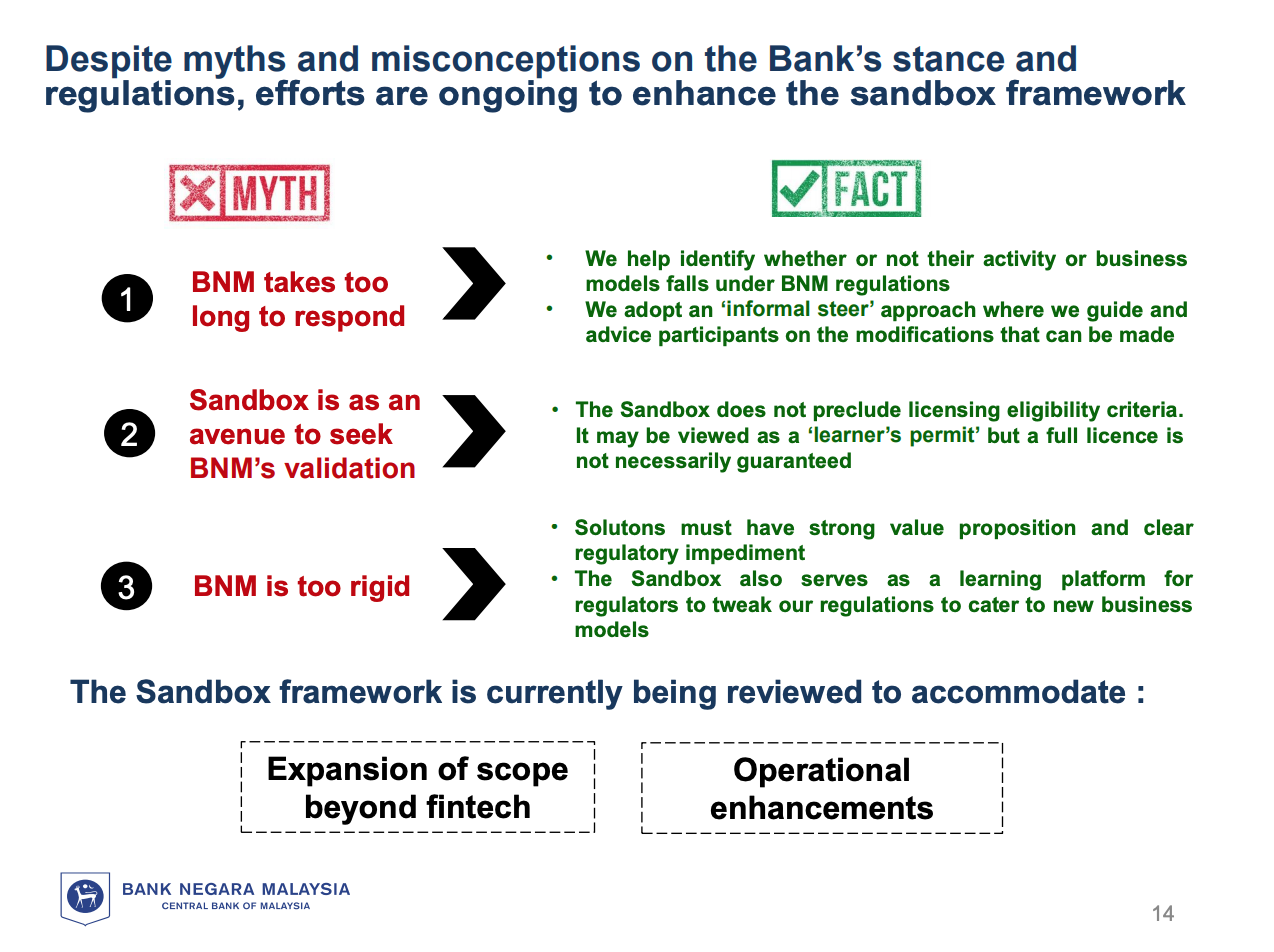 All in all, regulation mustn’t stifle innovation or focus on maintaining the status quo, Suhaimi said, but rather safeguard the public and ensure financial and monetary stability. As Malaysia moves towards greater digitalization of its economy, fintech will have a key role to play and policies will need to be “recalibrated to this new reality,” Suhaimi said.

“When [BNM] looks at innovations from fintech, we look at how these are helping us deliver our mandates and if there are facilitations that can be done that can help address the issue of inclusivity, ensuring that our financial ecosystem is more competitive, more progressive.

“If so, then that would be something [we would be willing] to help advance and make sure that the regulatory framework [is right], enabling the financial ecosystem to support the economic transformation.”

You can watch the full video here: