The banking sector in Asia Pacific is filled with opportunity in 2022, whilst also facing intensified competition. Rapid infrastructure developments and emerging technologies coupled with the pandemic have accelerated digital adoption across the region.

Industry wide initiatives, most notably the migration to ISO 20022, aim to improve the efficiency and security of real-time and cross-border payments.

Many banks are already adopting ISO 20022 for all their payments infrastructures including SWIFT, BahtNet, RENTAS, RITS, CHATS, PhilPaSS and MEPS+.

In short, regulations, deadlines and new technology combined make this a year for make or break propositions.

Any financial institution taking a casual approach to soft deadlines, like ISO 20022 and digital transformation is playing with fire. 2022 will be the year that you compete, or regret that you didn’t.

Bottomline has recently taken the temperature of financial institutions on a global scale in our report “The Future of Competitive Advantage in Banking & Payments.”

It shows that financial institutions are mostly focused on the core issues; digital transformation, regulation and changes in financial messaging.

When we took a deeper dive with a lens on urgency, five key points emerged:

This was, by some margin, the top ranked concern globally, with 64% of respondents prioritising digital transformation, which is linked to concerns two and three, real-time payments and cross border payments.

In Asia this figure rose to 78%. No digital transformation equals no new payment rails and no cross-border innovation.

Whilst digitisation has been a key focus for many financial institutions over the last decade, the Covid-19 pandemic has accelerated digital transformation developments.

For example, the sharp increase in the contactless user base (estimated to be as high as 20% in Asia) and the increased threat of fraud has demanded banks to react promptly, foster innovation and ensure compliance and security within their infrastructures.

Some insiders will tell you that the potential problem with this implementation is not technology. It’s people. The finance leaders that are most responsible for the fundamentals (money coming in and money going out) don’t have an issue with legacy technology.

If finance leaders are prioritising legacy technology, it is challenging to deliver everything on their payments agenda.

Overall, however, there’s an understanding within the larger banks that infrastructure needs to be modernised, so problems with buy-in at any level of the organisation needs to be solved quickly. 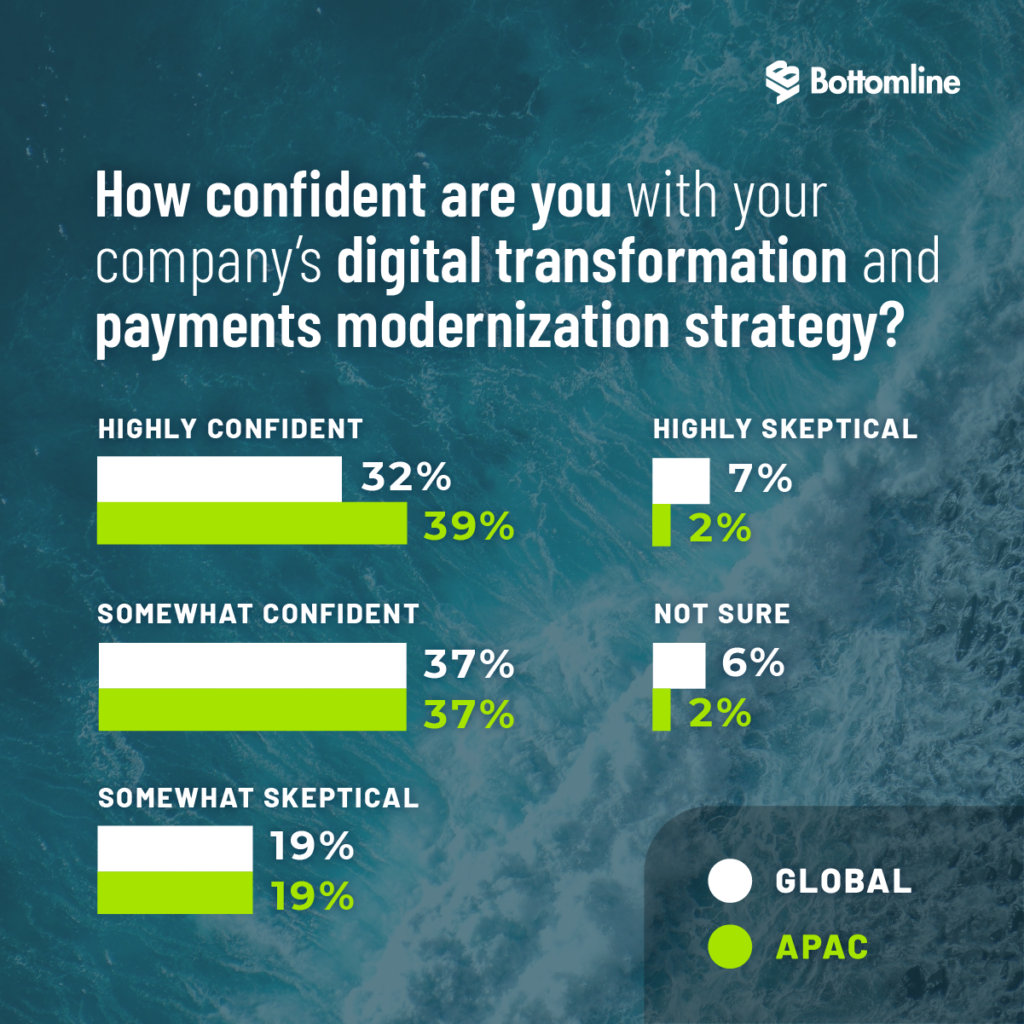 2. Regtech as a driver for growth

Asia Pacific in particular has witnessed a rapid increase in regulatory requirements over the last decade, which in turn has led to a boom in regtech usage by financial institutions to remain compliant.

In our research, 64% of respondents globally said that regtech will become even more important in the next 12 months, with this rising to 76% when isolating respondents based in APAC. 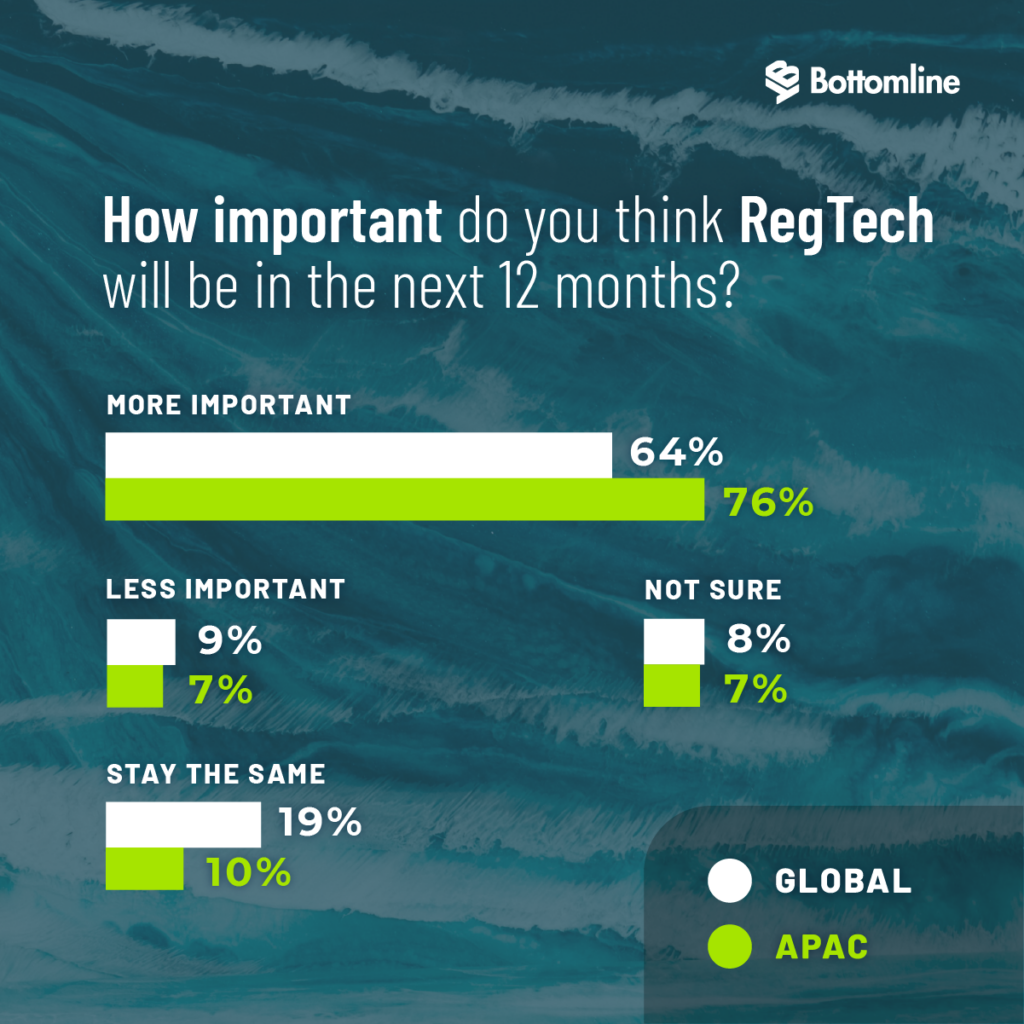 Each country across the region has its own regulators and requirements which are continuously evolving.

This presents an opportunity for regtech innovation and solutions to help financial institutions comply with the differences in regulations and streamline in-house compliance processes.

We believe financial institutions are therefore seeing regtech as more than a deadline for business continuity.

They’re seeing it as a driver for growth, an opportunity to improve customer service and protection against the rising threat of fraud.

3. Financial institutions need to get their skates on when it comes to ISO 20022 implementation

The findings here are a bit concerning. Our report found 13% of banks and financial institutions have started to implement ISO 20022, 15% are mid-way through and 13% have completed the integration.

These numbers reduce further for APAC, where only 5% of organisations have already implemented ISO 20022.

The SWIFT CBPR+ deadline of November 2022 is quickly approaching and many of APAC’s market infrastructures have already migrated (PhilPaSS – 2021) / are starting to migrate (MEPS+, RENTAS, BahtNet – H1, 2022). 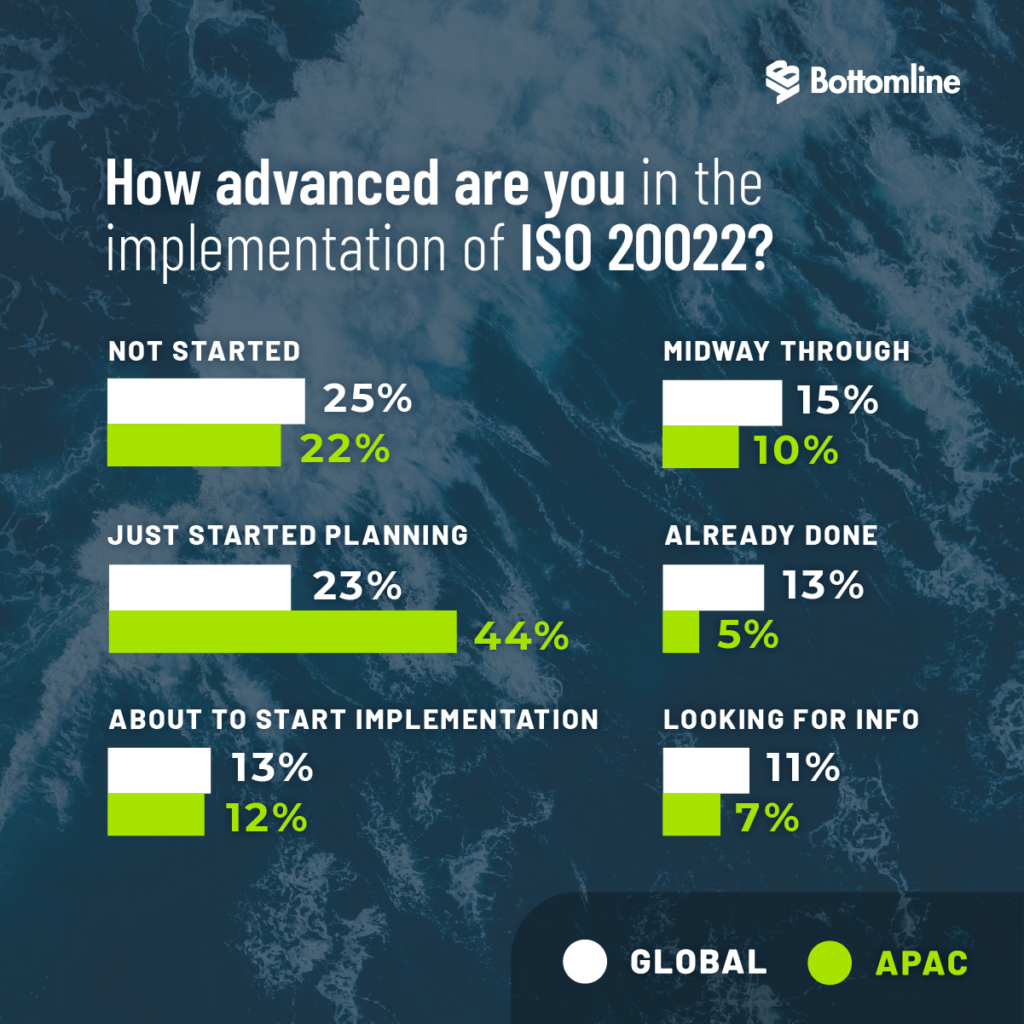 Every real-time system has ISO 20022 as its messaging standard. You can’t fully leverage big data without ISO because you’re using analog messaging.

That means that you can’t gain the insights that develop better customer experiences and new revenue streams.

The universal roll out will lead to enhanced interoperability and standardisation between countries as the region migrates to a single messaging standard.

In our survey, 31% said that the biggest obstacle when sending cross border payments is the cost of “nostro” accounts.

A nostro account is an account that a bank holds in a foreign currency at another bank.

In Asia-Pacific, for example, the cost of frozen liquidity in nostro accounts and other fees dock the average bank for US$1.7 million a year.

Some stakeholders have suggested that the proliferation of central bank digital currency (CBDCs) could help solve issues associated with nostro accounts.

But that won’t come in the short term. Financial institutions have faith in collaboration and co-existence. 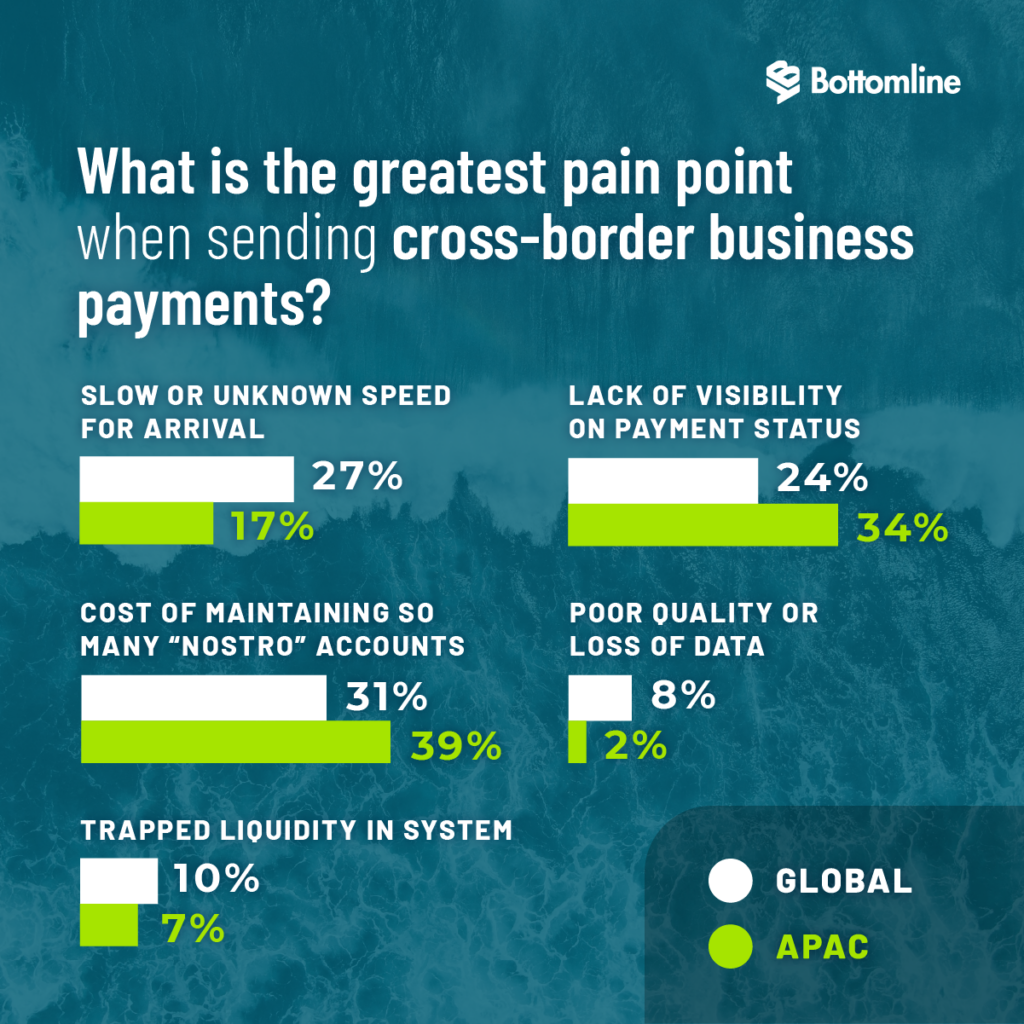 ‘Lack of visibility on payment status’ and ‘slow or unknown speed of arrival’ were also identified as key pain points.

The good news is that we’re seeing more collaboration between central banks in APAC to deliver seamless and secure cross border payments.

For example, in April 2021, The Monetary Authority of Singapore (MAS) and the Bank of Thailand (BOT) launched the PayNow and PromptPay linkage which allows consumers in both countries to send payments instantly.

Plans are also in place to scale the linkage to help facilitate business transactions across ASEAN.

In November, MAS and the Bangko Sentral ng Pilipinas announced an enhanced Fintech Cooperation Agreement to facilitate the linkage of Singapore’s and the Philippines’ real-time and QR payment systems to provide instant, low-cost cross-border payments.

The initiative improves the efficiency of cross border payments, enables end-to-end tracking and provides confirmation of payment to the recipient’s account.

The SWIFT gpi is being used by 4000+ financial institutions globally and payments are being made in 150+ currencies across more than 2500 country corridors.

Collaboration between central banks, as well as industry wide initiatives such as ISO 20022 and the SWIFT gpi, are paving the way for frictionless cross border payments and the vision of a pan-regional payment system in ASEAN is becoming more attainable.

The future of payments is in real-time. But it’s prioritisation within an already busy road-map that will be the greatest barrier to its adoption globally, according to our research.

Banks and financial institutions have a great deal to accomplish from a regulatory and industry compliance point of view, with ISO 20022, the SWIFT CSP etc.

Additionally, COVID-19 has led to a rapid increase in the use of digital payments, making the education of customers front and center since 2020.

This is somewhat less of a challenge for APAC, which has been leading the way in terms of contactless technology, apps and QR codes. 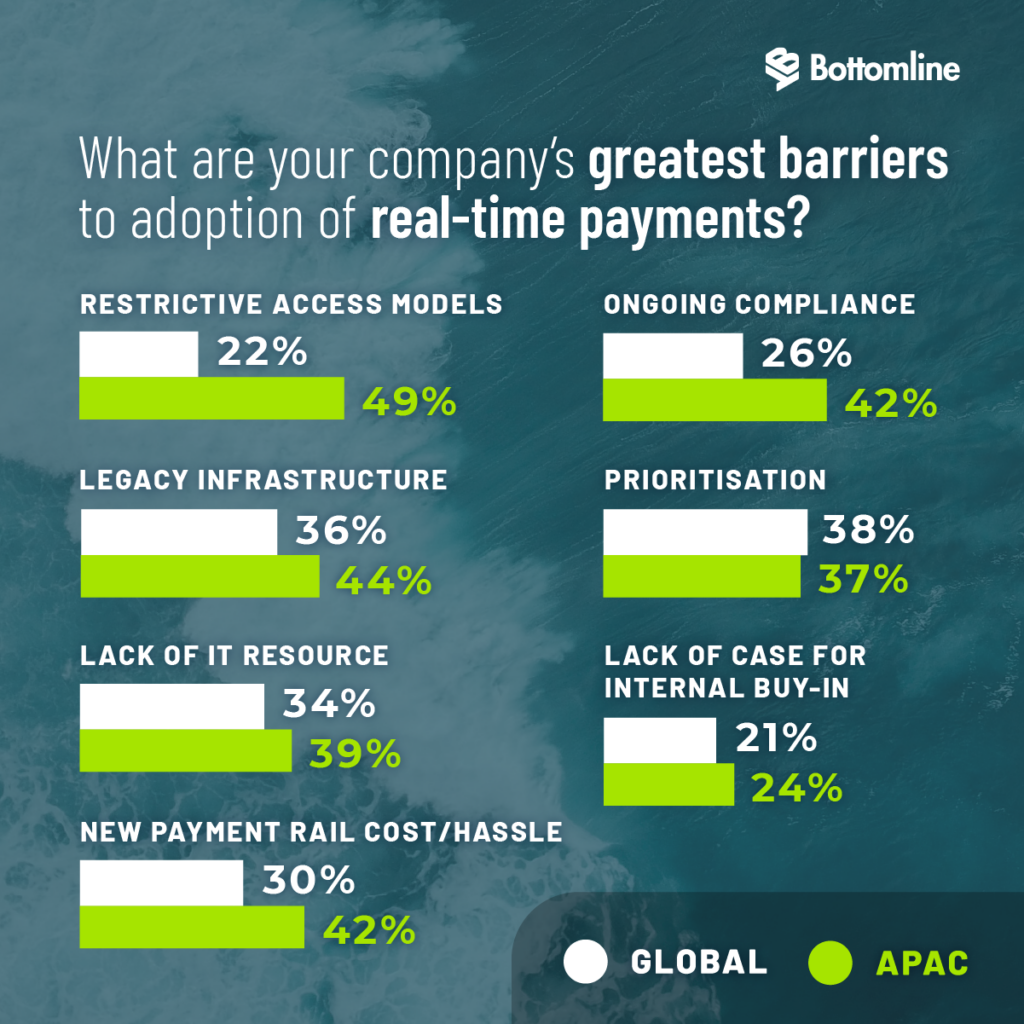 Real-time payment technologies have long been in the region, with Japan launching its Zengin System in the 1970’s.

There are now many domestic payment schemes across the region, including Hong Kong’s Faster Payments System, Singapore’s Fast and Secure Transfers and Thailand’s Prompt Pay.

However, according to our research, many barriers to adoption still exist such as restrictive access models and legacy infrastructure.

The good news is existing domestic payment schemes (such as those in Malaysia, Singapore and Japan) are being updated as efforts are being made to improve the speed and reliability of instant cross border payments, whilst other payment infrastructures in the region are in the works.

The migration to ISO 20022 will of course support these efforts.

It will be the financial institutions that understand the necessity of harnessing innovation to compete in 2022 that will be the winners.

Download Bottomline’s benchmarking report yourself and see how you measure up against your competition. 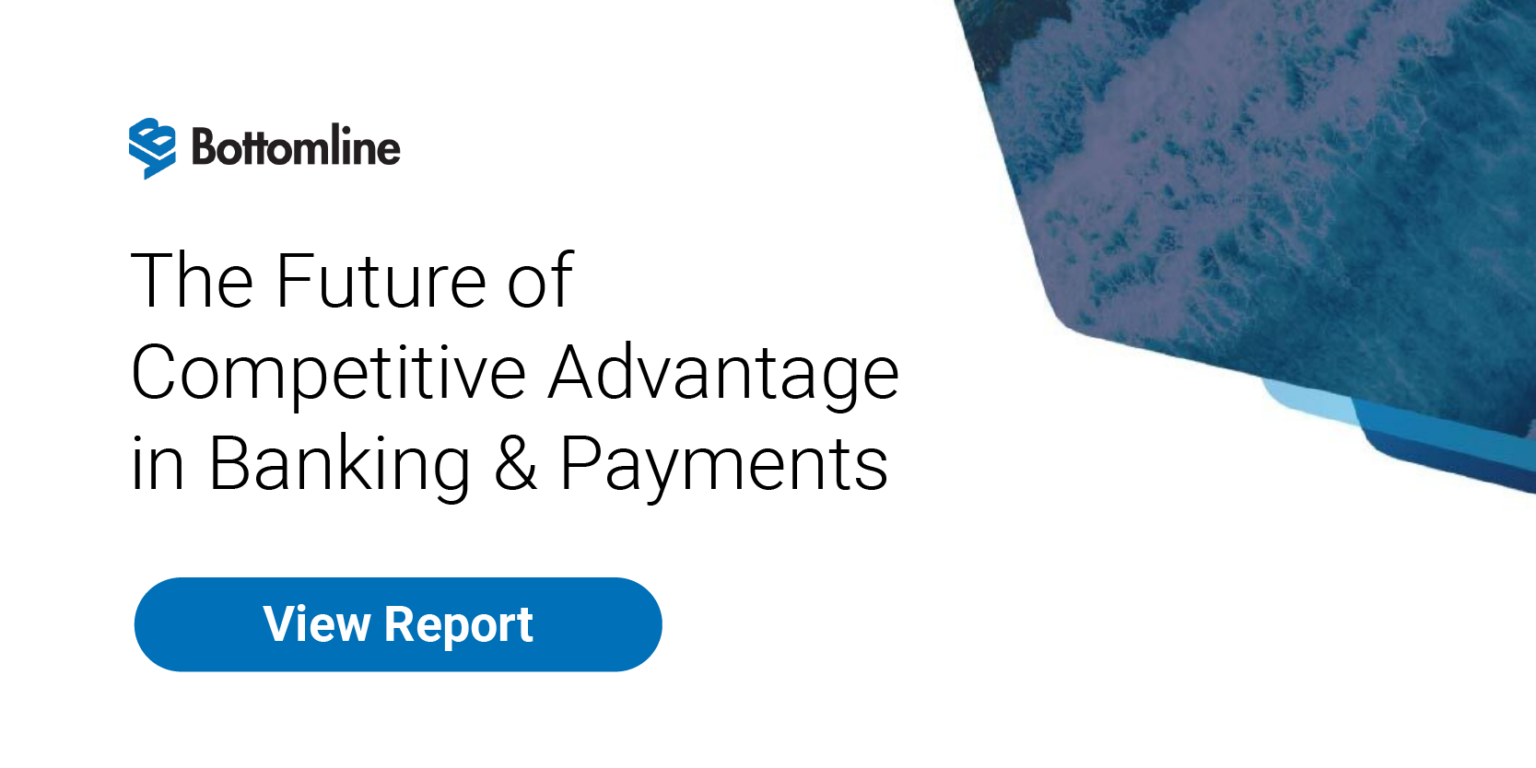 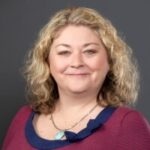 Zhenya Winter is the Head of Financial Messaging Marketing EMEA & APAC, Bottomline Technologies. She has more than 22 years of experience in the Financial Services sector, focused on payments over the last 10 years. Key areas of specialisation include Real-Time domestic & cross-border payments & ISO 20022.

Stripe Teams up with PayNet and Launches in Malaysia