This is in line with RHB’s drive to boost innovation and digitalisation which includes driving the operationalisation of its upcoming digital bank in partnership with Boost, the fintech arm of Axiata Group.

Boost and RHB had formed a partnership in June last year to form a digital bank consortium in a successful bid for one of the five digital bank licenses doled out by Bank Negara Malaysia recently.

In the digital bank consortium, Boost owns a majority stake of 60% while RHB holds the remaining 40%.

RHB had also made several other key internal movements and appointments within its senior management team.

RHB has also expanded the role of Norazzah Sulaiman with her appointment as the Group Chief Sustainability and Communications Officer.

The above senior leaders will continue to report to the Group Managing Director and Group CEO of RHB Banking Group. 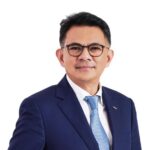 “The movement and expansion of roles within our existing Senior Management team takes effect from 16 May 2022.

It underlines our focus towards the growth and development of our internal talents, and demonstrates our commitment in adapting to changes in the business landscape, while ensuring the effectiveness of our senior leadership bench in driving better performance paving the way for the implementation of our new Group strategy that will be announced in due course,”

Asia-Pacific Fintech Market to reach US$72 billion by 2020