The year 2017, has been an interesting year for the Fintech Malaysia scene, while there’s been progress in this scene in the past few years it was really in 2017 that we see fintech being increasingly mainstream in the Malaysian mindshare.

As we usher in 2018 in anticipation for the development of the Fintech Malaysia scene, let’s take a walk down memory lane and review some of the key moments for 2017.

2017 saw the introduction of several key milestones in regulatory development for fintech in Malaysia, both Bank Negara Malaysia and Securities Commission Malaysia have been actively observing and reacting to the disruption by introducing guidelines and regulatory changes as illustrated in the timeline below. 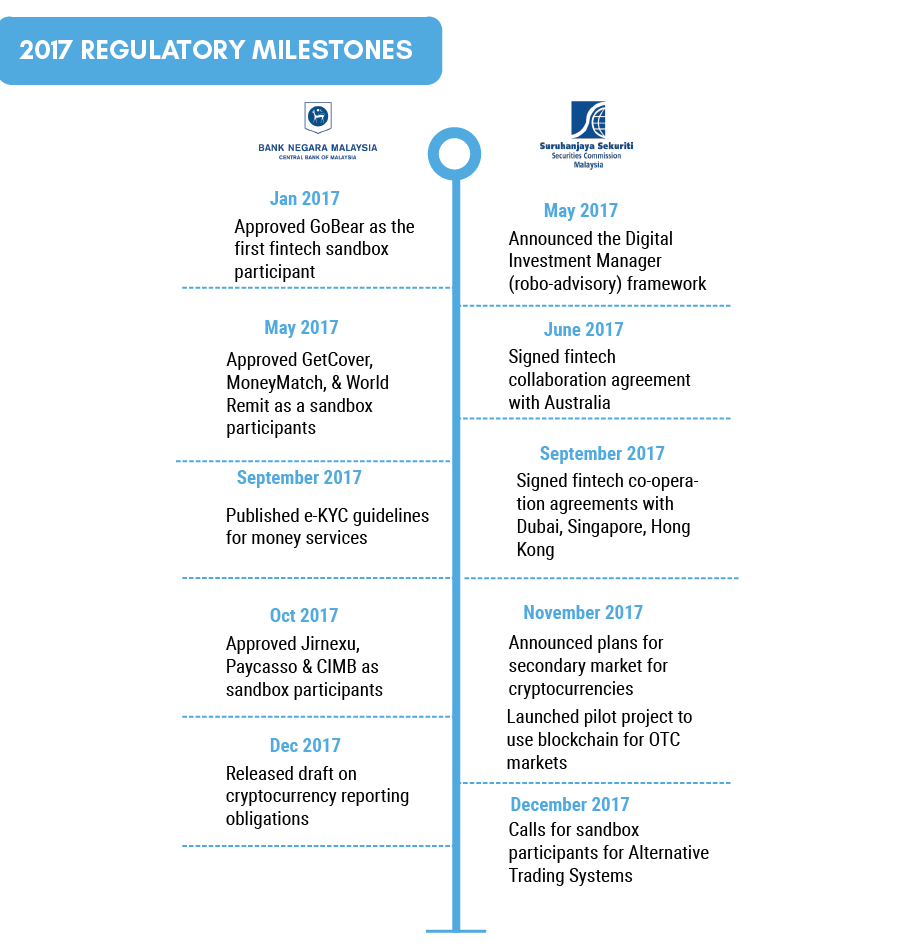 2017 Year of Payments for Fintech Malaysia

We witnessed significant developments in the Fintech Malaysia scene especially within the payments space, with major players like AliPay and WeChat Pay throwing their hat into the ring.

In 2017 AliPay has made significant partnership with the likes of CIMB, Maybank and Public Bank. They have also received approval from Bank Negara Malaysia to set up a joint entity with Touch ‘n Go named TNG Digital.

Malaysian Banks Strengthens Their Play to Respond to Fintech Disruption

While 2017 was not the first year we see banks strategising to respond to fintech disruption, we’ve certainly seen an increase in activity. Maybank launched their 3rd edition of “Maybank Fintech” which seeks to partner with bright and promising fintech companies. They have also launched the “Maybank Sandbox”, the sandbox is intended to be a platform for the community to develop and collaborate on their fintech ideas.

In 2017 Hong Leong Bank has also launched their own accelerator called HLB LaunchPad in partnership with MBAN  and Cradle Fund Sdn Bhd where the winning team will be considered for an equity investment of up to RM1 million.

Not wanting to be left behind, Public Bank started their hiring spree for their very own fintech team, though much of their activities remains below radar in 2017, we’ll likely see more developments from Public Bank in 2018.

Announced  in October, the Malaysia Fintech Awards 2018 aims to recognize the achievements of the most innovative fintech companies in Malaysia and honor their contributions towards the country’s economic development.

The  award ceremony is featured as the closing of the 2 days event in the ‘Malaysia Fintech Expo“‘ happening on the 5th & 6th of March 2018 in Kuala Lumpur Convention Centre.

A Bright 2018 for Fintech Malaysia

While many for the industry would argue that Malaysia is not moving fast enough compared to some of our South East Asian neighbours, the foundations for a bright Fintech future in Malaysia has been laid down in the recent years. 2018 will definitely be an interesting year for Fintech Malaysia.

Robo Advisors Are Coming To Malaysia, Here’s Why You Should Care