In a market where there is a lingering fatigue of new e-wallet releases, the ACE Market-listed company, PUC Berhad officially unveils their e-wallet — Presto Wallet.

On top of the standard cashless payment options for online and offline retailers, one of the functions that was highlighted Presto Wallet is the ability to perform mobile reloads and bill payments to utility companies –Though it is largely considered quite a standard feature that most wallets have.

Like most other wallets, the Presto wallet also enables its users to perform peer-to-peer transactions i.e sending money to their friends and family.

Within it’s app, Presto Wallet also features deals that reminiscent of the Groupon days, the function is not too dissimilar to features offered by the likes of Boost, Fave (who’s technically not an e-wallet), and kiple.

The user interface for the deals however, looks like it could use some fine-tuning compared to some of its competitors in the market. 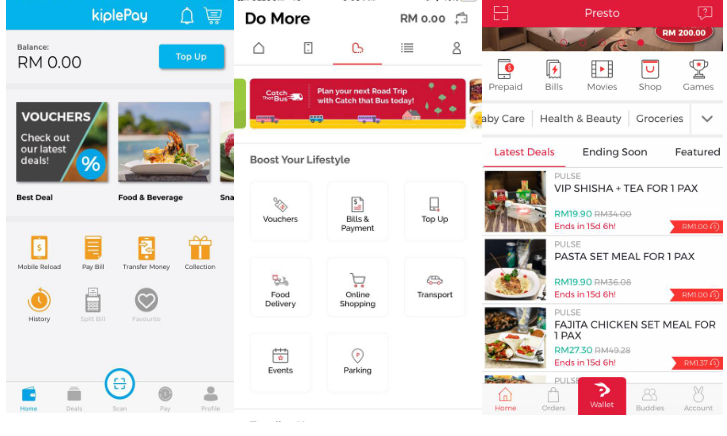 Side to side comparison

Presto Wallet also said in a press release that they will soon integrated onto 11street, an online marketplace with more than 13 million product listings from 45,000 sellers. Though it may be worth noting this collaboration is not unique as 11street already has an existing partnership with Boost that is already directly integrated into its app.

While I’ll be the first to welcome more competition to the market, I feel like new players who are joining the game later needs to bring some new to the table in order to be competitive. However, to be fair many of these earlier players have also went through many iterations before becoming the slightly more refined version that it is today.

All in all, Presto Wallet is not a terrible e-wallet, as far as e-wallets go, they do have all the standard features. Having said that, it’ll be tough for Presto wallet to survive this competitive market if it doesn’t innovate fast.