Digital Bank Aspirants Cautions Incumbents Not to Be Complacent

In week two of Fintech News Malaysia and Huawei’s Digital Banking Symposium, we continue the conversation by speaking to Malaysia’s digital banking aspirants. In our previous session Malaysian incumbent banks’ CEOs remarked that while digital banks will shake things up, it is not seen as a threat to incumbents.

The digital banking aspirants present for the panel discussion unsurprisingly did not agree with that assessment. He said that digital banks will not pose a threat to incumbent banks right off the bat, simply because they will start by targeting the unbanked, a segment which traditional banks aren’t interested in. But in the long-term, incumbent banks will eventually feel the heat if they don’t transform their business models quick enough.

Hudhaifa Ahmad, Co-founder and Executive Director of MyAngkasa, said that when digital banks launch full-fledged operations, probably anywhere between three to five years down the road, incumbent banks will need to start worrying. 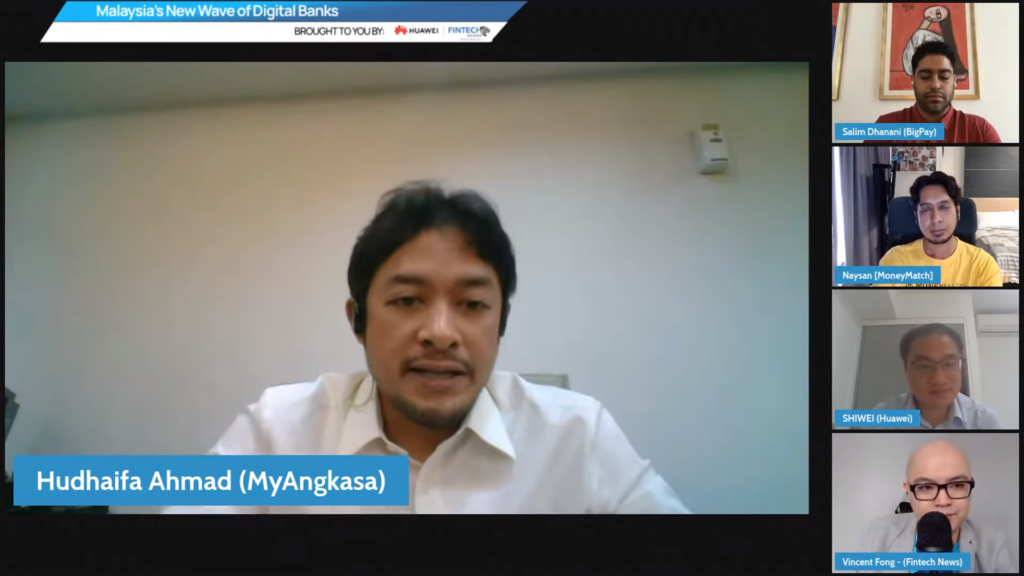 “If the incumbent banks still operate [the same way] … I don’t see anything that would prevent digital banks from slowly encroaching into the retail segments of the incumbent banks,” Hudhaifa said. “The threat will be underway if they don’t decide to transform early.”

Meanwhile, Naysan Munusamy, Co-founder of MoneyMatch asserts that because many digital bank aspirants are founders, they are in it for the long haul versus bankers who are employees who he feels might not share that same level of commitment.

“It’s fundamental in nature, we are founders, when you are an employee you care more about the bonus, you only care about the next few years but we [founders] are looking at a much longer-term, it’s a little different our thought process.”

Wu Shiwei, CTO of Huawei Cloud’s Asia Pacific (APAC) operations, said that across the region, banks are rapidly embracing emerging technologies and working on delivering user experiences similar to those of digital challengers, but noted that speed was their greatest weakness. 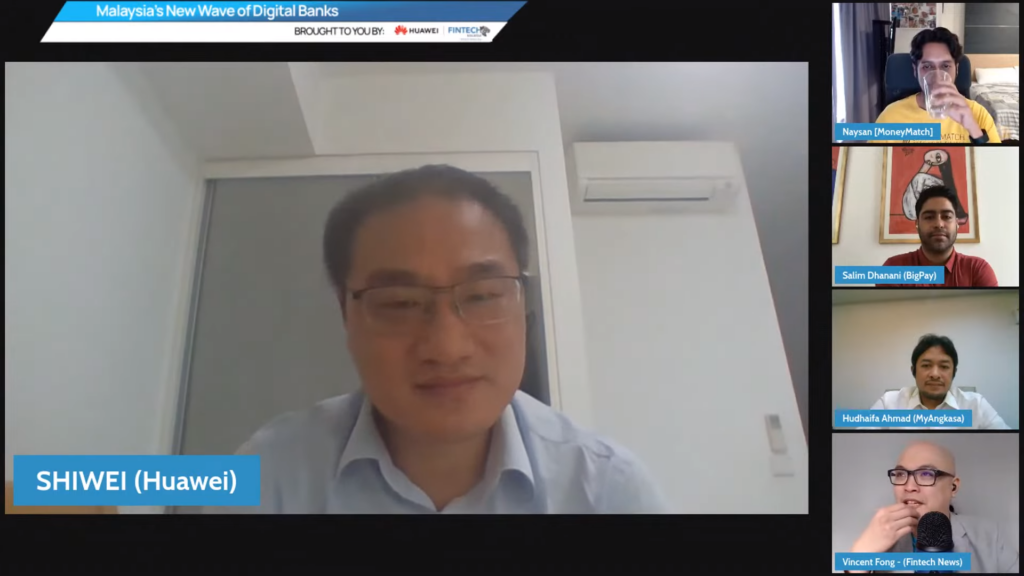 “It will be interesting to see how the digital banks will succeed. And in the short-run, it will be good to see new digital banks come to the market and force the incumbent banks to move faster,” Shi Wei said. “Incumbents might have the vision, but in terms of the speed, they are going a bit too slow.”

Hudhaifa said that if his company was to be granted one of the Islamic digital banking licenses, the newcomer will first focus on serving Angkasa’s captive 7 million members and at least 10,000 cooperatives, most of which are financially underserved.

The company plans to leverage its strong brands and extensive footprint across Malaysia to bring simple, yet innovative banking products, Hudhaifa said, before expanding to provide a full spectrum of financial services.

For BigPay, the opportunity lies in Malaysia’s booming middle class and its large micro, small and middle-sized enterprises (MSMEs) pool.

“There will be a rise in the middle class and we want to be able to cater to that segment by offering low-cost products,” Salim said.

“The market in Malaysia is going to be small, about 32 million people … Even in ten years, that’s not going to exponentially increase. So the Malaysian economy is going to be built on the ability to provide credit financial services to allow SMEs to expand regionally. That’s something I see as being valuable and something we want to be a part of.”

“By understanding how customers using your products behave, how SMEs and freelancers behave, and how they earn revenue … these companies can provide financing, adjust their risk models, as well as offer fundamental hooks to better engage with customers on an ongoing basis,” Salim said.

Naysan added that MSMEs were a particularly attractive segment because of the lack of financial services available. 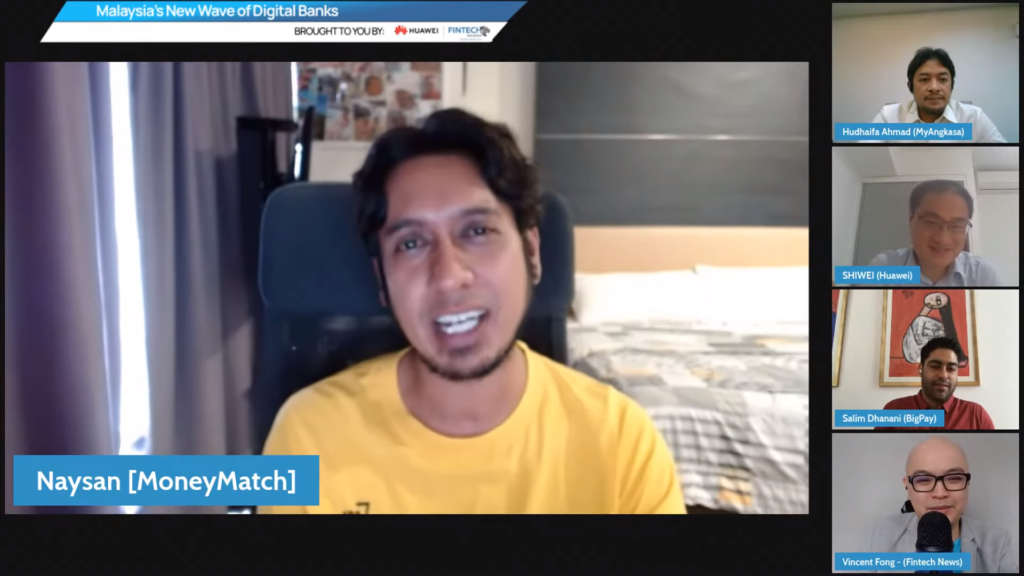 “We see payments in general as a penetration point but there are still a lot of SME financial services that are simply unavailable in this market. Even to get a simple corporate debit card you need financial statements, longevity, all the minimum requirements,” Naysan said.

“We see a lot of SMEs that are unable to get simple invoice financing or any form of sophisticated financial services simply because they are too new and too small in scale. There’s so much space to grow.”

Shiwei said that, on that topic, digital banking contenders applying as consortia might have an advantage because of the various types of data each and every one of these organisations will bring to the table.

“A lot of the problem is about how banks can determine the credibility of a SME with the lack of supporting data,” Shiwei said.

“With the consortia and the ecosystems they are bringing, [digital banks] can utilise their data and that can be used to determine, using some sort of big data analysis, to help the digital banks to convert some of those SMEs into customers.”

Speakers also spoke about the challenges inherent to the Malaysian market with all agreeing that the tech talent shortage needs to be addressed urgently.

“Malaysia has a good [talent pool]. There’s a lot of bankers and ex-bankers, as well as Big Four guys … but engineering is a bit of an issue, especially engineers who have an understanding of software coding and financial services,” Naysan said. “That’s something that’s a big challenge.”

Shiwei said that the tech and engineering talent shortage was an issue not just in Malaysia but in the broader Southeast Asian region. He added that profiles with financial, banking and compliance knowledge in particular were in high demand.

“Huawei works with a couple of digital banks. A number of them relies on the cloud vendors to provide the suggestions and training on for example security best practices, also sometimes relies on us to try to address the special requirements from regulators,” Shiwei said.

“Relying on outsourcing companies and vendors like Huawei Cloud, is not a sustainable way. The digital banks have to build the internal talent to run their business.”