5 Underdogs in The Malaysian Fintech Scene That Deserves Your Attention

In the past we’ve done several listicles highlighting the top funded fintech companies to the hottest fintech startups to watch. While these list do a decent job in highlighting some of the outstanding fintech players in Malaysia one thing it does not do well is showcase some of the lesser known startups who shows great promise.

Which is why we decided to do something slightly different this time around. In our many interactions with various players in the scene, we’ve picked 5 fintech startups that we thought deserves more attention.

This list of companies does not necessarily indicate that they are the best companies out there, in fact some of them may still be seeking regulatory approval to carry out some of the intended activities.

What you can expect from this list however are companies with great ideas, companies that we feel shows real promise or companies that solves pain points that other players aren’t looking at.

With that in mind let’s dive into it:

Goals 101 sits between the intersection of fintech and adtech. It is described as a company that ultilises Artificial Intelligence and Machine Learning to analyse spending patterns from data acquired through partner banks. This data is then used to help brands and banks to identify, reach and influence hyper-relevant customers.

The Malaysian arm is lead by it co-founder Jubin Mehta, a former senior level banker with Standard Chartered Bank Malaysia and is backed by by serial entrepreneurs, senior bankers, product heads, data scientists, and they were most recently joined by Shyam Ramamurthy who was the Global Head of Engineering for Yahoo.

This little known Malaysian based fintech startup was launched in 2017 has since secured 21 banking partnerships across Asia and raised $US 3.5 Million in its Pre-Series A round through its entity in India. The founders of MyMy aren’t rookies to the fintech scene, its CEO and Co-Founder, Joe McGuire was previously the Global Head of Sales and Partnerships for Airwallex, an Australian based international payments firm that recently raised US$ 80 Million in funding. Prior to that Joe held a senior level position with Australia’s largest bank, Commonwealth Bank of Australia

Its other co-founder Allen Goodwin was known for his work with The Finnish government in introducing Europe’s first pre-paid card. Dubbed the MONI Migri program, it is a card issued for Syrian refugees to receive benefits and wages. It was sanctioned by the EU as a model for processing and payments both immigrants and refugees.

Last but not least, its 3rd co-founder, Kishore Samuel has held senior positions for some of Malaysia’s top banks as well as high acclaim at Khazanah.

While at first glance MyMy seems to be just another digital wallet player, which we’ve previously established there are already plenty in Malaysia. MyMy takes KYC data a step further leveraging financial transaction data to build a customer profile. This can then be used to solve issues surrounding identity for the purposes of financial inclusion.

Ultimately MyMy aims to model itself after neo-banks/ digital-only banks like Monzo and Revolut.

At its core Revenue Monster’s goal is to empower businesses by bundling services like mobile payments, loyalty programs and social media into “Fintech as a Service” offering.

On its payments front, Revenue Monster enables merchants to accept payments via cards and any mobile wallets. Compared to some of the terminals in the market where you’ll have to manually select the wallet brand, Revenue Monster’s system automatically detects the QR code and credit the payment accordingly.

Its system also provides a sleek dashboard filled with useful analytics that merchants and business owners to give them an overview of their transaction data which includes the type of e-wallet used. 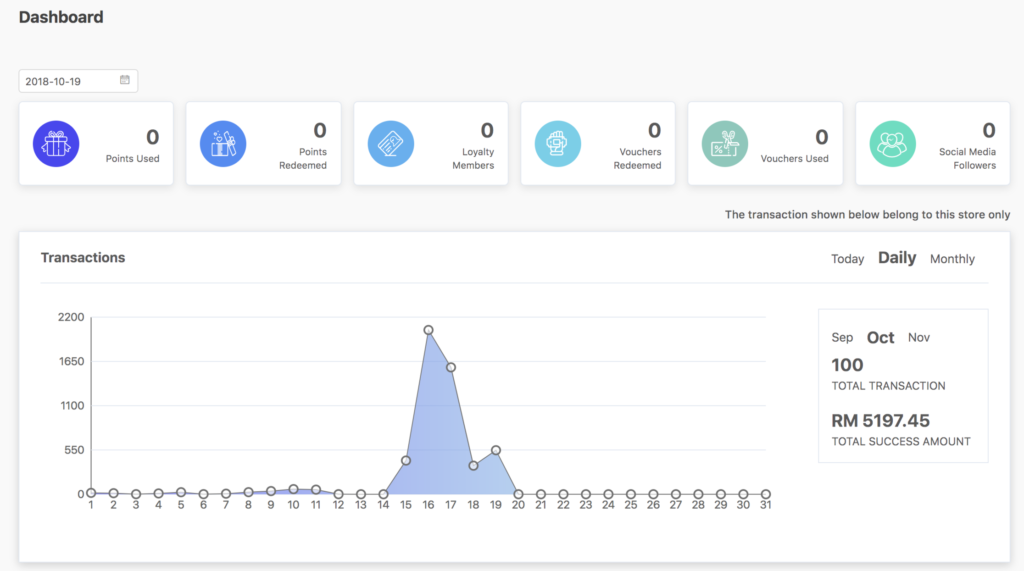 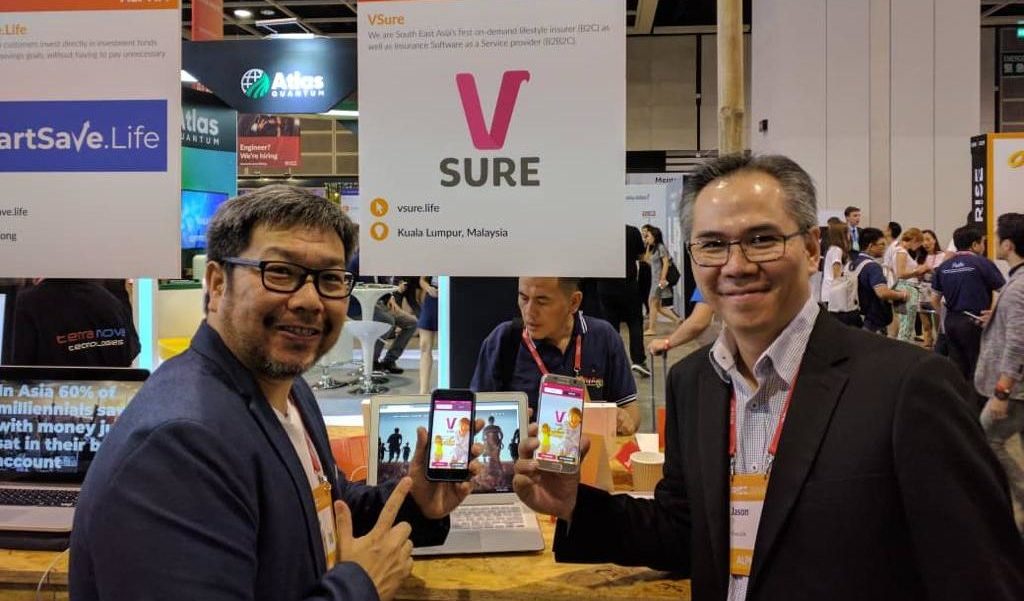 A new entrant to the insurtech game, Vsure is looking at introducing highly-tailored on demand insurance to South East Asia, starting with Malaysia. Currently still at its early access stage, the company envisions the usage of e-KYC to enable its customers to purchase tailored coverage.

Say for example it’s a nice Sunday morning and you decide to go for a hike, during this hike you would like to have the peace of mind knowing that you are protected from unforeseen circumstances. Below is how the process of getting tailored insurance from Vsure will look like. 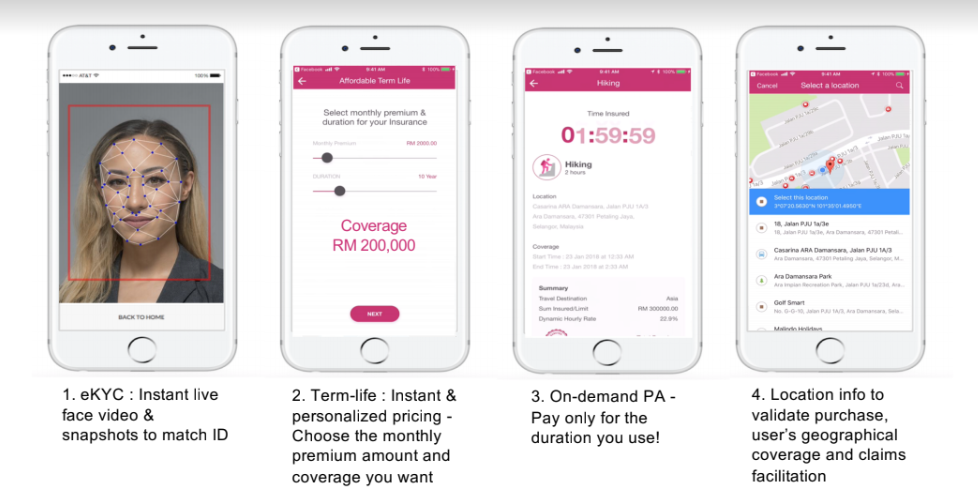 To those familiar with the global insurtech scene you’ll notice some similarities between Vsure and companies like Trov and Sherpa.

Though its still in early stage it has already won the confidence incumbent insurance players like AXA Affin Life and several more local insurance companies is said to be in their pipeline to be on boarded as their partner.

Attempting to solve this issue is a company named WorldKoins, it is a mobile app operated by Appykoins Sdn. Bhd, which allows leftover currency to be converted to eGift cards and vouchers from the likes of Lazada, Grab, and Xbox Live.

And no, before you ask, it’s not a cryptocurrency.

As recent as last year, they’ve partnered up with AirAsia to allow for in-flight exchange of leftover currencies. While this seems like a good partnership, it strangely only allows for Ringgit Malaysia to be changed for selected flights from Kuala Lumpur.

Many might point out that e-wallets like BigPay and Merchantrade Money can solve the issue of even needing to travel cash in the first place, however, there are still many countries that has not fully embraced the cashless movement.

We’re unclear about the traction that WorldKoin has but it certainly would be an interesting idea if it is well executed down the line. The emergence of e-wallets might also play to the company’s favour if they are able to strike a partnership with some of the bigger players in town.